The unofficial world for Fishing Trawler is world 116 (P2P).

Fishing Trawler is a Fishing minigame run by Murphy that players can access at Port Khazard. A minimum of level 15 Fishing is required to participate. Players board a trawler boat and try to prevent the boat from sinking as they are sailed for 10 minutes around the sea. Ironmen and Hardcore Ironmen accounts cannot play Fishing Trawler. The unofficial world for this minigame is world 116.

Getting to the Fishing Trawler[edit | edit source]

The Fishing Trawler is located in Port Khazard. There are several ways to get there:

To start the minigame, cross the gangplank and board the trawler at the north pier in the port. This would cause the trawler to set sail in 1 minute. 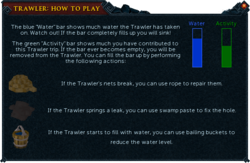 A player swimming after failing in the Fishing Trawler

The main objective of the minigame is to prevent the trawler from filling with water. Holes that cause leaks in the boat can be patched using swamp paste. Water that leaked into the boat can be bailed out using bailing buckets - regular buckets do not work! It does not matter where you empty the bailing buckets, it can be done on the spot.

From time to time the trawler's net can get torn. A chat message "The net has ripped!" appears when this happens. The net must be repaired with rope. To do this, players should climb the ladder on to the aft deck of the boat and inspect the net. A rope will automatically be used to fix the net. While ripped, no new fish can be caught, although those already caught are not lost.

During gameplay, a blue "water" bar will show how much water is in the trawler. If this bar becomes full the trawler will sink, the trip will fail and fish caught would be lost. Players have to climb onto a floating barrel to be able to return to shore. They will arrive on the coast a short distance north of Port Khazard and take minor damage. 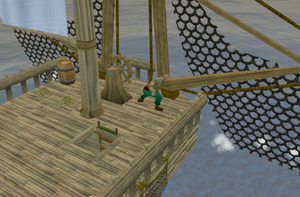 A player fixes the net

Successful teams will be returned to the Port Khazard dock where they can inspect the nearby trawler net to receive their rewards. The items awarded typically include raw fish as well as some junk items. Players also receive a small amount of Fishing experience. The type of fish caught depends on the player's Fishing level. Consuming a fishing potion, fish pie, or admiral pie right before checking the rewards net will improve the specific catches you get.

Players may frequently find that they are the only person playing Fishing Trawler. It is possible, although difficult, to successfully complete the minigame alone. With fewer people on board, one may experience fewer leaks and net getting torn less often. Bear in mind however, that it might still be quite overwhelming to players who are new to Fishing Trawler.

When playing Fishing Trawler alone players should bring around 200 swamp paste, 7 bailing buckets and 20 ropes, all purchasable in Port Khazard. In rare cases the player needs more than 20 ropes.

Make filling the leaks your priority whenever they appear. Bear in mind that although bailing will be much faster than filling leaks, you are alone. Without fixing leaks, sooner or later they will overwhelm you and bailing will not be able to keep up. Your second priority would be to fix the net after leaks are tackled; you won't want to waste your trip for nothing due to netting. Once leaks and nets are fixed, start bailing.

Since the Evolution of Combat update players can use their action bar to quickly bail with and empty out their bailing buckets. An empty bailing bucket and full bailing bucket can be placed on the action bar and filled/emptied efficiently using key binds. It is possible for a single player to bail out more water than is entering the boat if there are up to 5 holes in the boat. This strategy also effectively removes the need to bring more than a single bailing bucket, as the player will be able to handle bailing relatively easily by simply holding the two bound hotkeys simultaneously.

Playing Fishing Trawler with multiple players is similar to playing the minigame alone, although much easier. Larger teams will experience far more leaks and torn nets than smaller teams; however, it's very advantageous to have a player stationed at each leak spot and several extra players to bail and fix the net. Players should focus on fixing holes and bailing out water to prevent the trawler from filling up with water.

To work together most effectively players should fill leaks within a particular area of the trawler. For instance, one player may fill holes in the southern end of the boat while another may fill the holes in the northern end of the boat. One player should be responsible for fixing the net as it becomes ripped - this player should be positioned near to the southern ladder so that they can quickly access the deck. When playing Fishing Trawler with multiple people, players may wish to adjust the amount of items they bring. Those not fixing the net may wish to bring more bailing buckets and swamp paste, while those fixing the net may find it helpful to bring additional ropes. 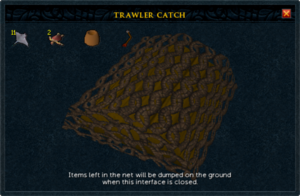 The Trawler Catch, where players receive their reward

After successfully completing a game of Fishing Trawler players receive rewards by searching the net near Murphy. The trawler will reward players with raw fish, up to and including raw tiger sharks. The type of fish received depends on the player's Fishing level. The Trawler-specific tiger sharks require a Fishing level of 95, which is not boostable.

The amount of fish received is equal to the "Total catch" number (displayed during gameplay) divided by the number of players who were playing the minigame. In solo games a player will usually get between 10 up to 25 fish. In team games it is sometimes possible to obtain up to 30 fish per person.

In addition, players may also receive some 'junk' items:

If the ardougne cloak 4 is worn, junk items will be replaced by more valuable items, including oysters, opals, sapphires, buckets of sand, seaweed, silver stone spirits and gold stone spirits.

On occasion, player may also come across rarer, untradeable items:

Rewards can be banked from the rewards interface. Alternatively, fish can be collected to inventory and deposited into the deposit box which is just south of the net.

Upon completion of a successful trawl, players are also awarded Fishing experience. A player with level 99 Fishing will receive approximately 2-3k Fishing experience per trip. It should be noted that the amount of experience a player gains is equal to 40 percent of the experience they would receive from fishing their total catch by regular methods. For example, each swordfish caught in Fishing Trawler will give 40 experience rather than the normal 100. 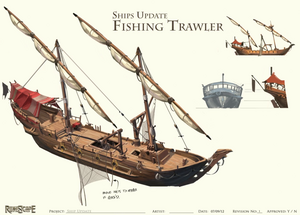