Fishing Contest is a quest in which the player has to earn the friendship of two dwarven brothers by securing a fishing trophy for them. Afterwards, they allow the player to use the dwarven passage underneath the mountain.

The mountain dwarves' home would be an ideal way to get across White Wolf mountain safely.

However, the Dwarves aren't too fond of strangers. Austri and Vestri will let you through the tunnel under the mountain, however, if you can bring them a trophy. The trophy is the prize for the annual Hemenster Fishing competition.

To begin, talk to either Austri or Vestri, stationed at the cave entrances on both sides of the White Wolf Mountain; Austri can be found just north of the Taverley lodestone, and Vestri is located just east of the wheat patch in Catherby. Ask what is through their caves, and they will flatly refuse to divulge this information, saying the tunnels are only for their friends.

Ask them to become their friend, and after thinking for some time, they ask the player to win and retrieve the coveted gold trophy from the fishing contest in the western town of Hemenster; they have an entrance pass, but unfortunately dwarves don't make good fishermen. Agree, and they will gladly pass on the fishing pass for entry into the contest. 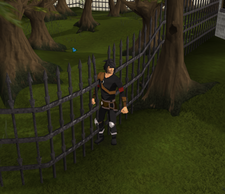 Squeezing through the gate.

The quickest way to Hemenster is to use the Seers' Village lodestone and follow the path south-west to the entrance to the ranging guild or use a combat bracelet to teleport right outside the guild. Enter the house directly opposite of the guild and speak to Grandpa Jack.

He says that he won the fishing contest for four consecutive years, fishing at the good spot near the outflow pipe. He also recommends fishing with red vine worms as bait, found in McGrubor's Wood, and garlic should be used to get rid of the vampyre who has claimed the fishing spot as his own. Garlic can be found in the building that contains a Cooking Range in the Seer's Village.

Red vines near the fairy ring.

Alternatively, walk to McGrubor's Wood, located west of Seers' Village and directly north of Grandpa Jack's house. Do NOT use the main entrance to enter. A forester will angrily send players away, claiming it as private territory. Fortunately, there is a loose railing in the northern part of the woods that can be used to enter it on the eastern part of the fence. Go around the forest and squeeze through it. Once inside, level 33 guard dogs will attack any players who get close. Head to the western area of the woods and locate the red vines to the west of the fairy ring and near the fence; dig up at least three red vine worms.

Place the garlic in one of the outflow pipes.

Exit McGrubor's Wood through the loose railing and go back to Hemenster. Once there, show Morris the fishing pass and pay a one-time entrance fee of 5 coins to Bonzo, the judge of the contest.

Players who start fishing before placing the garlic in the pipes will only get raw sardines, resulting in losing the contest to the stranger.

Speak to the Sinister Stranger about switching fishing spots, but he refuses; therefore, he must be lured away. As vampyres dislike garlic, put the garlic into the wall pipes next to him. He eventually complains of a horrible smell and agrees to change places. 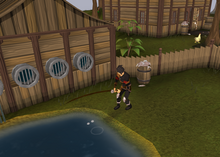 Fishing for the giant carp.

Speak to Bonzo or attempt to fish by the pipe to start the contest. With the worms in the inventory, keep fishing and catching raw giant carps until the whistle sounds to end the competition; the character will be navigated automatically to hand over the catch to Bonzo. Because the carps are so unique and large, the player will be announced the winner of the Fishing Contest! They are congratulated and awarded the fishing trophy.

To complete your quest, go back to Austri or Vestri and give them the trophy. The dwarves will be happy to see gold and give the player access to the underground passage. Fishing Contest is directly required for the following quests/miniquests:

This information has been compiled as part of the update history project. Some updates may not be included - see here for how to help out!
Retrieved from ‘https://runescape.wiki/w/Fishing_Contest?oldid=35954981’
Categories:
Hidden categories: