The Fisher Realm is a kingdom on a plane alongside to the plane of Gielinor. The realm is ruled by the Fisher King, however Sir Percival becomes the new king of the Fisher Realm during Holy Grail. The realm was recently terrorized by the Black Knight Titan, but it was killed during the quest. There are not many citizens in the kingdom; there is only one house with a cooking range and a small farm plot. 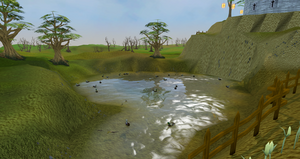 A group of ducks living in the restored realm.

Access to the realm requires partial completion of the Holy Grail quest. It can be entered using fairy ring code BJR, or by blowing a magic whistle under a tower on the peninsula northwest of Brimhaven. The magic whistle obtained from the quest will be needed to reenter the realm if players can not use the fairy ring.

Blowing the whistle within the realm will teleport the player to the tower northwest of Brimhaven.

The realm contains 3 lure/bait fishing spots, numerous sheep for shearing, rams for killing and a range. The realm is usually empty, thus making it the perfect area to kick back, relax and fish. Also, there is a lake with about twenty level 2 ducks. Although the range is some distance from fishing spots, there are also trees that can be chopped for cooking fires. 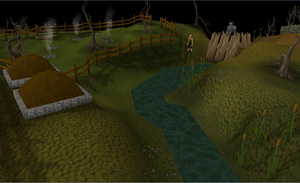 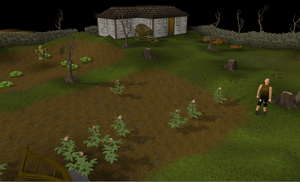 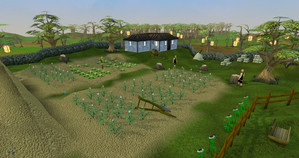 The Fisher Realm is restored to its former glory.
Retrieved from ‘https://runescape.wiki/w/Fisher_Realm?oldid=35350277’
Categories:
Hidden categories: