The fish mask does not require any stats to wield and is purely decorative. When wearing this mask and fishing, fish will occasionally give the player compliments. Players receive no fishing benefits from this mask. Right-clicking the mask when worn and selecting "blow bubbles" allows the player to blow bubbles from the mask for 2 seconds.

A player blowing bubbles with the Fish mask 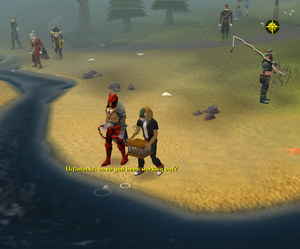 Fish talking to a player