Fish food is an item used in the Ernest the Chicken quest, as well as for feeding pet fish obtainable only by members.

Members can create fish food by using ground guam and ground seaweed on an empty box, however it provides no Cooking nor Herblore experience.

Fish food is currently only used in one quest, Ernest the Chicken. The only place for free-to-play players to find fish food is in Draynor Manor, where it spawns on the 1st floor[UK]2nd floor[US] in a room with level 36 ghosts. Fish food can be used with poison that can be found in the kitchen of Draynor Manor. 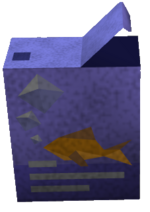