From the RuneScape Wiki, the wiki for all things RuneScape
Jump to: navigation, search
For the Magic spells, see fire spells.
For the special move of the Spirit Tz-Kih, see Fireball assault scroll.
Fireball? (edit) 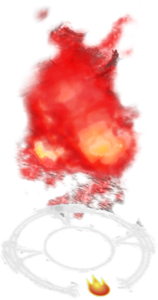 Fireballs are an elemental node in the Runespan that allows players to draw fire runes from it. They are found on all floors. It requires level 14 Runecrafting and gives experience in cycles of 34.8 experience each, though occasionally will also give 2 experience when a failed siphon is performed. With this experience rate, the fireball becomes the second-best node to siphon from for free-to-play players, with the fleshy growth being the best, and the vine following closely in third place.

Unlike creatures, players do not receive any rune essence when a node is depleted of its energy.