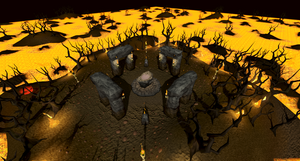 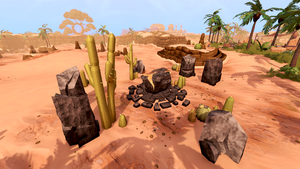 The Fire Altar may be found west of the Duel Arena and north of Al Kharid. It is used to craft Fire runes from rune essence or pure essence, providing 7 Runecrafting experience.

As with most other runecrafting altars, it can be accessed via the Abyss. Players can also enter its ruins by using a fire talisman, an Elemental talisman, or an Omni-talisman. Players can also simply click on the ruins while wearing a fire tiara, Omni-tiara or wicked hood imbued with any of the above, an Omni-talisman staff, or a fire talisman staff.

Currently, the fastest way to get there is to use the Wicked hood's teleport, which can only be used 2 times per day, or 3 if all the Wicked robes have been purchased from the Runespan. The second fastest way is to break a fire altar teleport tablet. Both of these methods teleport the player just outside of the altar. The wicked hood can be obtained by talking to Tam McGrubor, and the teleport tablets by playing the Great Orb Project.

Another option for fast crafting, is by using the a Ring of Dueling and teleporting to the Duel Arena. This leaves you a few steps away from the altar for quick and easy access. With this method, you would teleport to Wars Retreat, use the bank and activate the Ring of Dueling.

Slower, but still an option is to use to teleport to the Al kharid lodestone, and walking north-west out the city, then north-east.

The maximum likely limit for crafting Fire runes in one visit is 759. This would be achieved by having 70 Runecrafting, giving a 3x bonus, and carrying 253 essence to craft (23 in the normal inventory along with 48 in the 5 sizes of Runecrafting pouches, along with 175 claimed from the wicked hood (if all the Wicked robes have been purchased, and 7 from any abyssal summoning creature), whilst wearing an explorer's ring (which has a 1 in 10 chance of producing an extra rune per essence). The maximum possible experience is 1,771 obtained while doing the above.

It is possible to make Steam runes, Smoke runes, and Lava runes while at this altar, but at a 50% success rate. This will result in less runes than normal being made. To make a combination rune, the player needs one set of elemental runes, a stack of pure essence, and 2 talismans.

A fire tiara may be created at this altar by having a fire talisman and a normal tiara in your inventory. The player must use the tiara on the altar. Doing so will earn 35 Runecrafting experience.