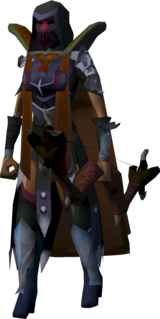 FightpitPKer is a player spoof involved in The Elder Kiln. She fights in the Fight Pits to kill several Ga'als. She may be fought during the quest.

She appears to be wielding a Dark bow, full Pernix armour, an Amulet of fury and a Ranging cape. She has the unique ability to use her Dark bow as a surprisingly effective melee weapon at close range, but she uses ranged far more often.

She starts off fighting against the mage LolthenKILL, so it is recommended to leave the pair alone until one is defeated. As ranged beats magic in the combat triangle, FightpitPKer is generally the victor. Protect from Missiles or Deflect Missiles will prevent most damage, all if out of melee range. However, despite having good accuracy even against good melee armour, she cannot hit as hard or as consistently as Odischamp or LolthenKILL, so Protect from Magic or Deflect Magic is recommended if one of those are attacking you.

She is one of the deceased celebrated during the Festival of the Dead. Her memorial was attended by Cow1337killr. He claimed that she had a habit of creating scoring systems for everything, and suggested his name was a scoring system of how many cows he'd 1-hit killed. He referred to her by male pronouns.[1]