From the RuneScape Wiki, the wiki for all things RuneScape
< Fight Kiln
Jump to navigation Jump to search

75+ Magic
You need 75+ Magic (unboostable) to enter the boss arena.

60+ Agility
You need 60+ Agility (unboostable) to enter the boss arena.

40+ Mining
You need 40+ Mining (unboostable) to enter the boss arena.

Fight Cave
You need to complete the TzHaar Fight Cave activity and sacrifice a Fire cape once to permanently unlock this boss arena.
Level recommendations

90+ combat
It is recommended to have at least level 90+ in your chosen combat style (Attack & Strength, Ranged or Magic).

90+ Defence
It is recommended to have at least level 90+ Defence.

80+ Smithing
It is recommended to have 80+ Smithing to craft Obsidian armour which makes this activity significantly easier due to its ability to reduce incoming damage by 50-60%.

Obsidian helmets
Obsidian helms are best-in-slot as they offer 9-19% damage reduction and 10% increased accuracy for all monsters.

TokKul-Zo ring
The TokKul-Zo offers 10% damage increase and is the best-in-slot ring for the monsters.
Optional boosts

Beast of burden
A beast of burden carrying food may be needed as this is a long activity: Pack mammoth, Pack yak, War tortoise, Spirit terrorbird, or Bull ant.

Tokkul donation
Donate 45,000 Tokkul at Fight Cauldron for 10% more damage reduction from Obsidian armour for up to 1 hour.

When gathering supplies, it is important to leave at least a few inventory spaces empty to make room for the lava crystals that spawn throughout the fight. Each type of crystal stacks with others of its type, so you only need to leave enough inventory spaces for as many types as you plan to pick up.

Inexperienced players should bring a beast of burden to carry additional supplies.

Experienced players should bring a ripper demon or a steel titan. The TokHaar are not immune to familiars' damage despite the fact that it is still classified as combat damage. Ripper demons also increase the damage dealt as the target's health falls, which is particularly useful against TokHaar-Jad and Har-Aken. Scrolls will be required to deal additional damage, at the cost of some profit, especially with ripper scrolls.

Similar to the Fight Caves, the Fight Kiln involves fighting through waves of enemies before taking on the final boss, Har-Aken. If the player tries to log out in the cave, the game will log them out at the end of the wave after all enemies have been defeated. If you manage to log yourself out before defeating all of the enemies on the current wave you will have to start over on whatever wave you logged out on.

At the end of waves 10, 20, 30, and 33 lava will flow into the Kiln, reducing the size of the platform that the fight takes place from. There are some obstacles within the arena that can be used as safespots that protect the player from some monsters, but these will be reduced as the platform area decrease. At the start of wave 34 only the wall in the centre of the area will be available.

Lava crystals will spawn at the end of certain waves. They can be consumed to give offensive and defensive buffs, though only one crystal can be in use at any time. The offensive crystals usually aren't recommended if the player possesses overloads as they will prevent the use of some abilities from the drained combat styles.

One TokHaar-Ket-Dill will appear in wave 5 and 19. Six will appear in wave 28; one each to the northern corners, and two each to the southern corners. All six can be aggro'ed by standing in the middle, but because of their ability to stomp and damage the player for 1,000-1,500 hard typeless damage each time this occurs, it is sometimes better to deal with each quadrant one at a time to avoid a quick death.

Although fairly weak, they require a pickaxe to break their tough shells; without it, the player's attacks will deal no damage. Pickaxes on the tool belt work if a melee weapon is equipped. 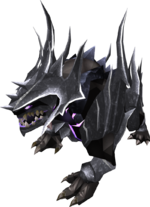 TokHaar-Jad is the Fight Kiln's stronger variant of the TzTok-Jad.

TokHaar-Jad attacks using all three combat styles and has a maximum hit of 12,250, however this is negated to around 100 damage if the player uses the correct Protection Prayer to defend against his attacks. 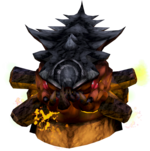 Har-Aken is the final boss of the Fight Kiln, appearing on wave 37. Har-Aken can only be defeated by killing its head, which emerges every 72 seconds for 27 seconds. Initially Har-Aken will continually deploy two tentacles; one ranged and one magic, both possessing 7,000 health. The ranged tentacles are weak to slash, while the magic ones are weak to thrown; high level weapons should not have any difficulty in damaging them. The tentacles can also attack with melee if the player is right next to them.

Har-Aken's head will first appear roughly 30 seconds after the wave starts. The head is considered to be a blocked 5x5 and possesses 150,000 health. Har-Aken is susceptible to the inquisitor staff, leech and poison. Although also susceptible to reflect damage, the head does not attack, so he is essentially immune to it. Har-Aken's head remains above lava for 30 seconds, after which he dives back down and remains that way for 72 seconds before reappearing again. The head will appear in centre east, west or south; never north. After the head reaches 0 health, the encounter ends and TokHaar-Hok will reward the player for their efforts.