Fight Arena is a quest that was released on 23 July 2002 and developed by Paul Gower. The quest features the player saving Lady Servil's family from the clutches of the Zamorakian Mahjarrat General Khazard, who is making them fight for his fun in the titular Fight Arena.

The prosperous Servil family have been abducted by the infamous General Khazard. He plans to have the family battle for his entertainment in the Fight Arena.

Can you rescue the Servils before the tyrant has these innocent (not to mention wealthy) civilians slain? 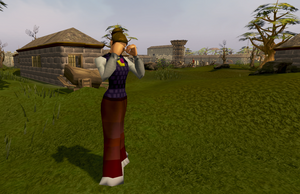 Talk to Lady Servil just South of Ardougne and west of the Ardougne Monastery. Ask about her broken cart, and she starts sobbing, saying that she doesn't care about the cart, and lamenting that Justin and Sammy aren't there, as they would fix it. Ask if you can help her, and she will introduce herself as the noble Lady Servil, and explains that she and her family were travelling north when they were ambushed by the Mahjarrat General Khazard and his men, who had been targeting them ever since they had refused to give him their land. While she was able to escape, her husband Justin and her son Sammy were kidnapped by the Mahjarrat, and that he is forcing them to fight in the Fight Arena for his amusement, and that they surely won't survive against the creatures of the arena. You will offer to save them, and she replies saying that she and her family will reward you if you do.

Head south to the local who is found just outside the north-western corner of the Arena, he has a red shirt and eyepatch. Talk to him, and claim to be "visiting friends in the cells". He thinks that's funny, as only the guards of Khazard are allowed to see the prisoners of the arena, and says that unless you have some Khazard armour, you won't be able to get in.

The location of the Khazard armour.

Head north-east to a group of buildings located south of the local monastery, or use any version of the Ardougne cloak to teleport there. The north-eastern-most house (the armoury) contains an armour stand which contains the Khazard armour set (a helmet and platebody) required to complete the quest.

After equipping both pieces of armour, head south back to the main arena and attempt to enter the prison, which forms the south and east boundaries of the Fight Arena. When attempting to open the door, you will realise that it is locked. If you are wearing the Khazard armour, the guards will mistake you for a Khazard Guard and let you in.

Head to the northern-most cell of the east wing of the prison and find Sammy Servil. Talk to him, and explain that you are here to rescue him and his father. Ask him where the cell keys are. He explains that the bald, fat, lazy guard with a goatee probably has them, as he's the one that usually locks up.

In the south-eastern corner of the jail, locate Gerald, the Lazy Khazard Guard, sitting at a table. Talk to him, and he tells you that he's gotten bored of laughing at the fight slaves, and that all he wants now is a decent drink, Khali brew to be exact. He also tells you that if he had too much, he would pass out and fall asleep. 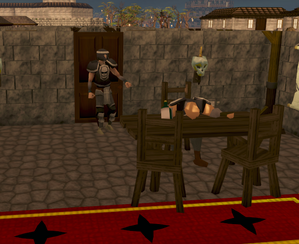 Taking the keys off the Lazy guard.

The only bar that sells the khali brew is the bar found just west of the western wing of the jail. Head there and talk to Angor, the barkeeper, and he will sell you the Khali brew for five coins. Once you have purchased the brew, head back in to the jail and talk to Gerald. After convincing him to take "quick drink", he will take a mouthful before proceeding to gulp the whole thing down, becoming extremely drunk. Convince him to let you deal with the prisoners while he "rests", and he will pass out. You can now take the keys from him.

Fighting in the Arena[edit | edit source] 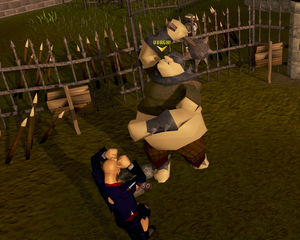 Get out any combat equipment and food you may require, as you will soon have to fight three or four enemies, although most players will find them relatively easy as they are rather weak and can be safespotted. You can teleport out if you need food at any time except during the Khazard battle if you want to kill him, even the lodestones work. However, your progress on that enemy will be reset. Head back to Sammy and use the cell keys on his prison door to free him. Sammy tells you that he overheard a guard saying they took his dad into the main arena, and so the pair of you head there in search of him. After entering the arena, a level 64 Khazard Ogre is released from its prison, and he will proceed to attack Justin before heading towards you.

If you die at any point during the quest, you can resume from the fight you died at by talking to the one of the Khazard guards at the entrances to the prison arena.

The Khazard ogre has a combat level of 64, and attacks with melee. He is fairly weak, being even weaker than a standard ogre. Magic is the advised attack style, as he is weak to air spells, and you can safespot him by luring him behind one of the skeletons in the arena, which will make the fight extremely easy. 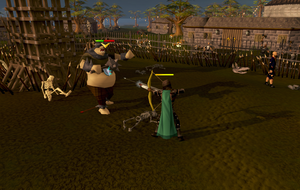 The safespot, which can be used to make the Khazard Ogre and most of the other fights in the quest significantly easier.

Alternatively, you can also range him from the safespot, or if you are suitably high levelled, melee him and turn on Protect from Melee, which will halve all damage.

After you defeat the ogre, Justin Servil will thank for you saving his life, and claims that he is in your debt. However, General Khazard will then appear and introduce himself, saying that the fight rather entertained him, but that the prisoners you just "saved" are his property. Say that they belong to nobody, and he replies that he will let them go, but on one condition: you must stay and fight for him, becoming his new fight slave, as you will make him double the gold if you manage to last a few fights. He calls the guards, and they take you prisoner, locking you inside a cell and taking your cell keys.

You are locked inside a prison cell. Talk to Hengrad, your cellmate, and ask him how he is, and he will tell you that he's been one of Khazard's prisoners since he was a child, most of his life spent fighting in the hope he may one day escape. Tell him not to give up, and one of Khazard's guards comes to escort you back into the arena.

As you enter, a level 50 Khazard scorpion will be released from its cell. Unlike the other bosses in this quest, the Khazard scorpion attacks with ranged, and thus cannot be safespotted. It is weak to crush attacks, so a crush weapon is advised, and, as it uses ranged, melee armour and the Protect from Ranged prayer may help significantly.

The scorpion is still relatively easy, and most high level players should have no problem with it.

General Khazard, impressed with your combat ability, sees that you need a tougher challenge, and so he releases his "puppy", a level 98 hellhound named Bouncer. Bouncer, like the ogre, is weaker than other hellhounds and attacks with melee. Unlike the ogre and scorpion however, Bouncer has no defined weakness, but magic attacks are nevertheless most effective against him.

As Bouncer uses melee, like the ogre, he can also be trapped behind one of the skeletons in the arena and safespotted from afar. Alternatively, most players should have no trouble meleeing him, with the Protect from Melee prayer making it significantly easier.

Once Bouncer is defeated, General Khazard becomes angered at his dog being killed, and claims that you will suffer for it. Say that he agreed to let the Servils go, and he remarks that he will let them, stating that he is not cowardly enough to make false promises. However, as you have caused him so much trouble today, you will remain in his arena so that he has the pleasure of killing you himself. Sammy and Justin leave the arena, telling you to come with them. General Khazard attacks you.

General Khazard is an optional fight, so you may simply teleport out of the arena or leave via the door if you do not wish to fight him. You will still be able to complete the quest by talking to Lady Servil.

General Khazard has a combat level of 84, 120, 87, 105, and like the ogre and Bouncer, attacks with melee. Like Bouncer, he is listed as having no weakness, but magic attacks are nevertheless more accurate than other styles, with ranged attacks being the least accurate. Even though he is a Mahjarrat, he is fairly weak, and can be killed with melee with relative ease or simply lured behind a skeleton and safespotted with magic or ranged. 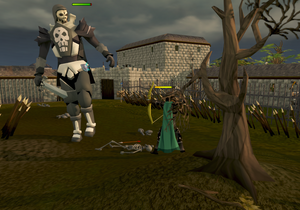 Fighting against General Khazard in his second form.

Once General Khazard is reduced to zero life points, you both head towards the entrance of the arena, and he proclaims that he cannot be beaten, and to "behold the power of the Mahjarrat". He turns into a giant version of himself, calls you a "puny human" and once again proceeds to attack you. In his giant form, he has 6000 life points, a combat level of 84, 120, 87, 105, and is slightly stronger. He still attacks with exactly the same method however, and should prove no challenge if you managed to kill him in his first form.

Once Khazard reaches zero life points for the second time, he screams "NOOOOOOOOOOOOOO!" and shrinks, seemingly disappearing. Leave the arena.

Head back to Lady Servil, who is still found west of the Ardougne Monastery. She is surprised that you are alive, as she thought Khazard had defeated you, and expresses her thanks that her son and husband are safe and sound, as without you they would certainly be dead. She will then proceed to reward you, as she promised earlier. 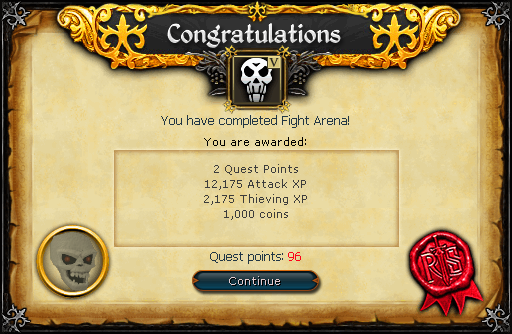 Fight Arena is directly required for the following quests/miniquests:

The quest was released on 23 July 2002, the same day as two other Members quests, Holy Grail and Tree Gnome Village. It was developed by Paul Gower, and Ian Gower was responsible for converting the quest into RuneScape 2.[1] A description of the quest was also released in the Game Guide:

The quest was reworked on 27 May 2009[3], which, among other changes, added a second form to General Khazard, graphically updated him to look like Zemouregal and Lucien, and replaced the attackable guard that wandered around the prisoner, who needed the Khali brew, with the stationary Lazy Khazard Guard.

With the release of Ritual of the Mahjarrat on 14 September 2011, some dialogue was adjusted in various Mahjarrat quests, which included Fight Arena. The most notable changes in Fight Arena are that Lady Servil no longer refers to having declined General Khazard's hand in marriage, and that the Khazard guards no longer refer to General Khazard as having led them for over 200 years in the form of an "undead maniac".