From the RuneScape Wiki, the wiki for all things RuneScape
Jump to: navigation, search
For normal version, see Fenris wolf. 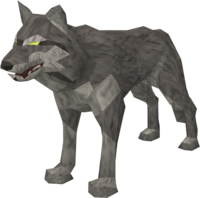 These Fenris wolves are summoned by Sköll in sets of three when fought in the Fremennik Province. Sköll exclaims, "Kusiner, kom och ät upp dem!" which translated from Swedish into English means "Cousins, come and eat them up!" when these are summoned. They are slightly stronger than their normal counterparts. They are more dangerous than they appear, as they move with run speed unlike most monsters, and have a tendency to stack together. They are best trapped behind trees or normal Fenris wolves. They also appear to have a larger wander radius than Sköll, able to attack players when Sköll has lost interest due to the distance.

They should not be underestimated as when Protect from Magic or Deflect Magic is active, their combined maximum hit is higher than Sköll himself. They switch targets frequently if there are multiple players around, making them far less dangerous.

When Sköll is defeated, they disappear after some time, proclaiming "Sköll har lämnat oss. Kusiner, slå till reträtt!" which means "Sköll has abandoned us. Cousins, break for refuge!"

They don't have any drops other than wolf bones and raw wolf meat, and does not give any experience when damaged.