From the RuneScape Wiki, the wiki for all things RuneScape
Jump to: navigation, search
This article is about the wolf found south of Rellekka. For the level 60 wolf that is found at the Feldip Hills, see Wolf (level 60).
For the wolves summoned by Sköll, see Fenris wolf (Sköll). 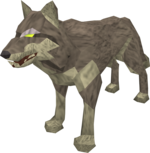 The Fenris wolf is a wolf found south of Rellekka. During the 2012 and 2013 Winter events, two to five level 70 Fenris wolves would be summoned by Sköll while you fight him.

During the 2012 Winter event, Jagex Moderators had the ability to spawn multiple Fenris wolves which could then be attacked. While they could be spawned anywhere, they were most commonly found at the Grand Exchange.

During the quest Fur 'n Seek, its pelt must be collected and cleaned for the Odd Old Man.