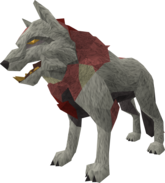 Fenrir is a legendary wolf of Fremennik mythology. He first appeared during the 2016 Winter event, and subsequently appeared every year, up to and including 2019, spawning to the north-east of the golden apple tree.

Fenrir doesn't count as a wolf for Slayer assignments.

When he appears, he is accompanied by smaller versions of Hati and Sköll. Fenrir is invincible until the images have been defeated, with any damage against him being reduced and redirected to the images. He has four special attacks: raining down fiery meteors dealing damage based on the player's current life points, summoning the images of Hati and Sköll, Slaughter, and a howl which puts abilities on a global cooldown for 3.6 seconds and halts channelled attacks and bleeds.

The update history project is a work-in-progress – not all updates to this topic may be covered below. See here for how to help out!
Retrieved from ‘https://runescape.wiki/w/Fenrir?oldid=31585112’
Categories:
Hidden categories: