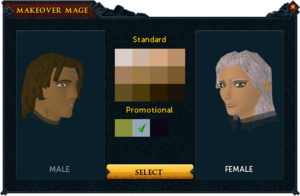 The Makeover Mage can change a player's gender and skin colour for free.

A player's gender does not limit their skills in any way, and, with minor exceptions, it does not restrict their abilities. Whilst male and female players cannot necessarily do the same things in all ways, they can do equivalent things. In contrast, some NPCs appear to be segregated (although subtly) by gender. For example, female H.A.M. members are easier to pickpocket than males.

Players define their character's gender when creating their account. They can change their gender at any time via the Makeover Mage near Falador for free.

This flexibility means that the gender of an in-game character does not necessarily reflect the real-life gender or gender identity of the player. However, in a March 2008 poll, 92% of respondents said their character is the same gender as themselves[1]. 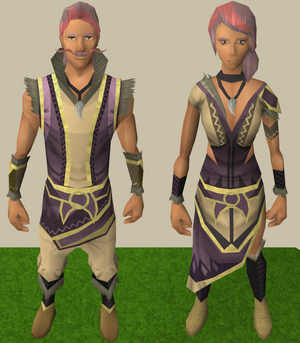 A male and female player. The attire when changing genders will alter in appearance.

The players of RuneScape are not evenly divided between the genders. In February 2008, Geoff Iddison (the CEO of Jagex at the time) claimed in an interview that the player base is "over 60 percent male", though the interviewer speculated that the true figure was likely to be higher than this comment would suggest[2]. Indeed, a poll conducted just one month later showed that 90% of respondents claimed to be male[3].

In June 2008, Iddison admitted that Jagex's strategy favoured male players but added that "we’ve got some plans there" to redress the imbalance[4]. Evidence of this appeared beginning in September of that year, when the RuneScape banner across the top of the homepage was changed to feature two female warriors prominently.

Players are generally not restricted on the clothes or armour they can wear based on their gender. For example, both male and female player characters may wear plateskirts, platelegs, and skirts.

There are a few exceptions to this; for example, the princess outfit (which only females can wear) and the prince outfit (which only male players can wear). This is the same for most Circus outfits such as the Acrobat costume. Essentially, the outfits are equivalent, and simply change from one version to the other as the player changes their gender. In addition, all Members Loyalty Programme outfits change when a player's gender is changed. Also, there is almost always a difference between armour when it is worn by a male player and armour when it is worn by a female player, and this can commonly been seen on body armour. For example, a male player wearing Verac's brassard has an exposed chest, but a female player will have a piece of cloth covering her chest. There is an exception to the armour differences, for example, the Christmas ghost top.

Gender plays little role in enhancing or limiting any particular abilities in RuneScape with the notable exception of the Recruitment Drive quest, which requires the player to be female. Male characters will need to change their gender in order to complete the quest. Note that your hairstyle might NOT go back to normal after a gender-change. However, there is a hair stylist who will change your hairstyle and facial hair for free in Falador, just north-west of the White Knight's castle.

There is also a minor restriction based on gender in The Giant Dwarf, in which the player must choose a mining company to join. Female characters cannot join The Brown Engine, but correspondingly, male characters cannot join The Yellow Fortune. Characters of either gender can still choose freely from any one of the remaining six companies, except The Red Axe, which no player may join.

During Throne of Miscellania, male characters must convince Princess Astrid to marry them, and female characters must convince Prince Brand to marry them. Players cannot choose which gender they would prefer to be with, as both Astrid and Brand seem to be heterosexual. The quest journal entry for Blood Runs Deep advises players to have the same gender they had in Throne of Miscellania to get the most out of the story.

However an observation made is that if you speak with Advisor Ghrim after completing Throne of Miscellania as a male and have since changed your gender to female, he will act as if you completed the quest as a female and vice versa. Likewise, King Vargas acts like the player was female/male when completing Blood Runs Deep quest even if they change afterwards.

Many NPCs have a well-defined gender, and these are not limited to humans. For example, Aga the troll and Zanik the goblin are female, while Doric the dwarf and Pescaling Pax the penguin are male. We can discern these from the fact that other NPCs refer to them as "she" or "he" respectively.

Low-level NPCs, known only as "Man" and "Woman," are commonly found in Lumbridge and other places. Unlike H.A.M. members, it is equally easy to pick the pockets of either gender, each requiring only level 1 Thieving.

Most regular non-human monsters are of indeterminate gender - for example, trolls and goblins that are not part of a quest will be androgynous - but humans will always have some kind of gender-defining characteristic. There are exceptions, however, such as with ice trolls. Very few characters completely lack a gender, such as stalkers and the Homunculus. Some genderless races such as demons and TzHaar are referred to as male in-game, despite having no true gender and reproducing asexually.

Most gods have a defined gender as well, with the exception of Xau-Tak. The Elder Gods do not have a true gender, but are referred to by female pronouns due to races such as the TokHaar and Mahjarrat likening their creation of worlds to mothers.

Angof is one of the first transgender NPCs on RuneScape.[6]

On 31 May 2005, Jagex released a revised female bodykit. The release note touted it as "a slight 'nip and tuck' to make the difference between male and female characters more obvious." The official Runescape forum erupted with criticism of the change, saying it was too thin and added unnecessary sexual emphasis to the bosom. Posts said that such unrealistic models can cause girls to feel negatively about their bodies and could encourage anorexia and bulimia. The forum topic maxed at 2000 posts and was closed.

Later that day, Jagex newspost "New Female Bodykit" discussed the negative reception. It said in part, "some might prefer the new female models, others might be equally disappointed with their new appearance." The newspost announced that the Makeover Mage, Hairdresser, and Varrock clothes shop were changed to be free for a week so players could "play about with the new look, and find a combination you like."