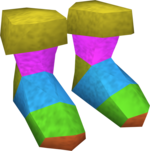 Fancy boots are obtained as a reward for completing the Stronghold of Security. If lost, they can be obtained from the Cradle of Life at the end of the fourth level (The Sepulchre of Death). Multiple pairs can be claimed. Fancy boots provide bonuses identical to those of bronze armoured boots (although the fancy boots weigh less), and cannot be dropped, only destroyed.