From the RuneScape Wiki, the wiki for all things RuneScape
Jump to: navigation, search
This article is about the personification of famine. For the familiar scroll, see Ravenous Locut scroll (Famine).
Famine? (edit) 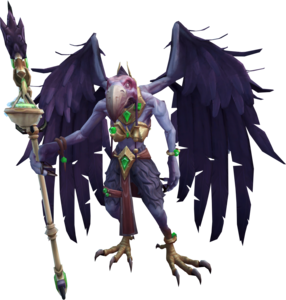 Famine is an Aviansie. While on Abbinah, she was shunned and left to die due to being a carrion. She was too weak to fly or hunt, and with no one to turn to she starved and came to the brink of death. Supposedly, the only thing that kept her going was her desire for revenge. Eventually, she found an untouched batch of food and adulterated it with poison, killing an entire village. She took none of the food herself, believing that she deserved death.

Death describes her as being noble in nature, but preferring to find her own path in life. Famine considers the other riders to be her family, a sentiment Death shares. However, due to her solitary nature, she rarely sees the others, and her absence from them has made her miss them greatly. She is particularly fond of War due to his personality.

Famine can be found in the Stormguard Citadel Dig Site, at the south-east end of the main island, near the Material cache (Armadylean yellow).

Using the hints that Famine's favourite colour is black, and that her favourite animals are arthropods, such as insects, crustaceans and arachnids, players had to help Beauty select a statue of a giant spider to build for her at Death's citadel during Deathcon II. Famine asked for her statue to not be placed next to Pestilence's statue, because she thinks humans mix her and Pestilence up.

'Till Death Do Us Part[edit | edit source] 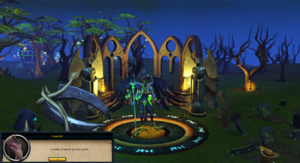 Death summons Famine to help deal with the chaotic rift.

Death called on Famine to help him and War deal with the Chaotic rift during the second week of the 2018 Hallowe'en event. Famine was glad to get a chance to see them, and saw it as an offer she couldn't refuse. She helped in the battle to destroy the rift by occasionally lending players part of her power so that they could defeat attacking Unwieldy zombies by starving them to shrink and kill them. 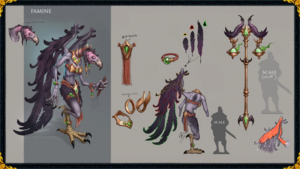