Family Crest is a quest during which the player retrieves the Fitzharmon family crest pieces from the three brothers to return it to their father.

The Fitzharmon family crest has gone missing, and the family honour has been lost.

Can you find the crest and return it to Dimintheis in Varrock?

There are three different rewards available, but you can only choose one; so choose carefully!

To start, speak with Dimintheis, whose house is in the fenced-off area in the south-eastern section of Varrock. He'll tell you that he belongs to the noble family of Fitzharmon, but without his family's crest, he can't prove his heritage and take back his estate from the King.

His sons took the crest when they left to defend Varrock against the hordes of zombies sent forth by an evil necromancer, and he doesn't know what happened to them afterwards. He has, however, heard rumours that his eldest son, Caleb, is now an aspiring fish chef and is currently staying with a friend just outside the western gates of Varrock.

Caleb can be found by Gertrude's house, located just outside the western entrance of Varrock. Talk to him, and he'll say that he and his brothers broke the crest into three parts to avoid any one of them inheriting their father's wealth. In their shame, they took a piece of the crest each and set out their own ways, unable to face their father. 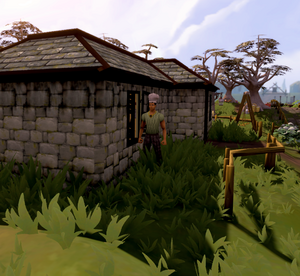 Since a broken crest is of no use to anyone, he agrees to exchange it for some fish that he needs for a special and unique salad he is currently making. What you need is a shrimp, salmon, tuna, bass, and swordfish — all cooked. If you need to catch the fish yourself (which requires level 50 Fishing and 45 Cooking):

Once you have all of it, give the cooked fish to Caleb and he'll give you the crest part as promised, along with a little bit of info: the gem trader in Al Kharid might know more about the location of one of his brothers, Avan.

Make sure that you ask Caleb about his brothers' whereabouts, otherwise the gem trader's dialogue options will not include Avan. 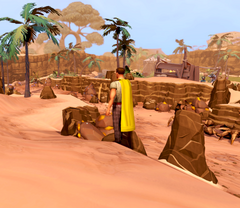 Avan wearing his yellow cape at the mines

Talk to the gem trader in Al Kharid about Avan. He remembers talking to a 'high and mighty' person of noble blood, looking for jewellery made from 'perfect gold'; he had directed him north towards the gold pit in the desert, the Al Kharid Mine. This is optional.

Head there and talk to Avan, the man with a yellow cape wandering around the pit entrance. He tells you that he is trying to win the affection of a certain lady by gifting her a ruby-studded ring and necklace made out of 'perfect' gold. You can mine uncut ruby from the Uncommon gem rock at the north end of the mine and cut them (requires 20 Mining and 34 Crafting). Unfortunately, the gold here in the desert isn't nearly good enough for him. He'll tell you about a dwarf named Boot who might know the whereabouts of this 'perfect' gold. 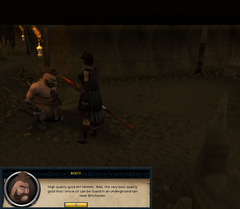 A player talking to Boot

Make your way to the Dwarven Mines below the Ice Mountain, a short distance northeast from the Falador lodestone. Boot can be found in a cavern to the south-west of the general store; talk to him and ask him about the elusive gold. He'll tell you that the highest quality of gold can be found in a small dungeon near Witchaven, although it isn't really easy to get to it.

Make sure to get good food and armour before heading into the Witchaven dungeon, as there are monsters that may harm lower levelled players (level 35 Hobgoblins, level 67 Ogres and level 92 Hellhounds). Home teleport to Ardougne and head east then south to an "old ruin entrance", and climb down it.

Keep following the path and then head south to a locked door to the east that leads to a room that holds a couple of hellhounds, along with the 'Perfect' gold rocks. To the north and south are two rooms with levers in and outside of them – you'll have to do a lever puzzle to unlock the gate to the caged area. 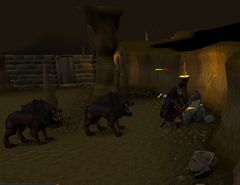 Remember that if you logout while doing the puzzle you will have to start over:

Mine two gold ores in the room and head to any furnace to smelt them into perfect gold bars, there's one just west of the Al Kharid lodestone. Next, make the perfect ring and perfect necklace by using the perfect gold bar on the furnace with two rubies in your inventory.

Once you have the items, head back to the Al Kharid mine and give them to Avan. As a reward, he'll give you the second piece of the crest and tell you where to find the final brother, Johnathon.

Items needed: An antipoison potion, a staff and enough elemental runes to cast and hit every blast spell at least once (air runes and a mindspike to change the element can be used to save on elemental runes).

The last brother — Johnathon — is staying in the Jolly Boar Inn, near the Lumber Yard. He is upstairs in one of the bedrooms. Climb up the stairs to talk to him (you might have to speak to him twice); he'll tell you that he got bit by a poison spider. Use the antipoison on him, and he'll be very grateful and relate to you about what happened. Apparently, Johnathon attempted to kill a blood demon called Chronozon. Unfortunately, Chronozon defeated him, and in his efforts to escape, he was bitten by the poisonous spider. When you ask him for the third part of the crest, he says that he dropped it while fighting Chronozon and that you must go retrieve it.

Chronozon is located in the Edgeville Dungeon, which is in the ruined building just south of the bank. Climb down into the dungeon and keep going north along that path, taking a left at the farthest corner. 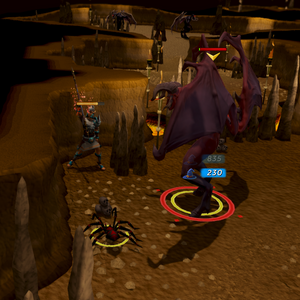 The safespot from the demon on the north-west side of the cave (camera facing north).

You may make use of the safespot in the north-west side of the cave, behind the space between the stalagmite and the torch. You may have to kill the aggressive poison spiders, but they can't attack you once you are in position.

You must use each of Air, Water, Earth, and Fire Blast to defeat Chronozon (they can be auto-casted, and abilities work). You must continue to attack using the blast spell until you receive the message "... Blast seems to have done all it will to Chronozon", at which point you must switch to another Blast spell. After you cast the blast spells successfully, you can fight Chronozon however you like. If you leave the area or logout during the fight, Chronozon will be restored to full health and you will have to recast the spells, even if you had already weakened him.

Once you've killed him, he will drop the crest part. Simply grab it and leave.

Now that you have all three crest pieces, put them together by using any one part with another to make the family crest and then make your way back to Varrock. Give the crest to Dimintheis, who will be very pleased to have it back. 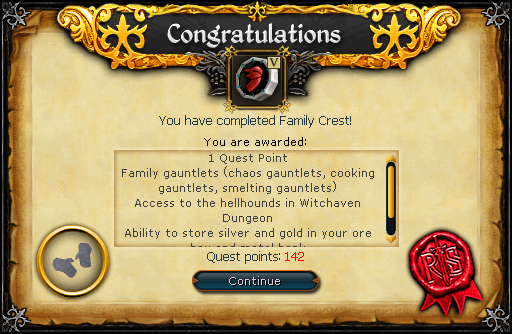 Family Crest is directly required for the following quests/miniquests: