From the RuneScape Wiki, the wiki for all things RuneScape
Jump to navigation Jump to search
The Old School RuneScape Wiki also has an article on: osrsw:Fall of Hallowvale

The Fall of Hallowvale was a massive military campaign led by Lord Lowerniel Vergidiyad Drakan in the early Third Age. The war saw the invasion of Hallowvale by Drakan and an army of vampyres, as well as possibly werewolves and other magically-infused races. 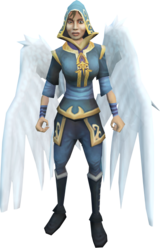 The war was planned as early as the late Second Age, when Lord Drakan aided the Mahjarrat Zamorak in his overthrowal of the deity Zaros. When Zamorak returned from Infernus nearly a score years later, he began the God Wars. He gave Drakan permission to conquer Hallowvale, which was at the time a peaceful, agricultural, Saradominist kingdom ruled primarily by the Icyene, who lived in harmony with humans.

Lord Drakan, the conquerer of Hallowvale.

Drakan invaded Hallowvale by crossing what is now known as the River Salve near Silvarea. Although the vampyres outnumbered the icyene forces stationed at Hallowvale, they had difficulty fighting them on even terms, as the icyene's natural lightness allowed them to bypass the mind-predicting capability of the vampyres, which they relied on to protect themselves from hostile attacks. The icyene also made use of various anti-vampyre weaponry, such as blisterwood, further contributing to a significant amount of vampyre casualties.

Despite this, Drakan's persistence (taking this as a personal grudge against the Icyene), along with the massive amount of vampyres at his disposal, allowed him to gradually push back Hallowvale's defenders back to their capital, as more Icyene fell, coupled with the apparent "uselessness" of the human defenders. From there, the vampyres camped outside the capital as part of a siege, though they did not dare go near, as the Everlight lighthouse shone so brightly that it acted as a natural repellent, and they also appeared to be deathly afraid of the water.

This seemed like it would be the end of Drakan's campaign, but he was able to sneak send several vampyres into the capital castle, where the royal family lived. The royal family and the guards inside were surprised by the intrusion and were able to drive them off, but Drakan was able to capture Queen Efaritay's human husband, Ascertes. He then threatened Ascertes with immense suffering; coupled with Archon Bable's withdrawal of the military (intending to abandon Efaritay), Efaritay was forced to surrender. Apparently unbeknowest to her, Drakan would turn Ascertes into a vampyre known as Vanstrom Klause.

Drakan would go on to sink the Everlight and convert Hallowvale's capital into a blood-farming ghetto known as Meiyerditch, and using unknown magicks managed to turn the wooded region into a dangerous swampland of eternal darkness he would refer to as Morytania. Since then, the region has been a hotbed of conflict, and has been involved in wars such as the Morytania Campaign, the Misthalin - Morytania War and the Sanguinesti Liberation War. 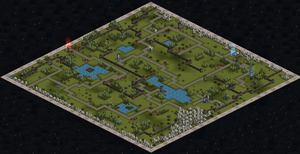 Fall of Hallowvale as seen in Armies of Gielinor
Retrieved from ‘https://runescape.wiki/w/Fall_of_Hallowvale?oldid=35446888’
Categories: