From the RuneScape Wiki, the wiki for all things RuneScape
Jump to: navigation, search
The Old School RuneScape Wiki also has an article on: osrsw:Falconry 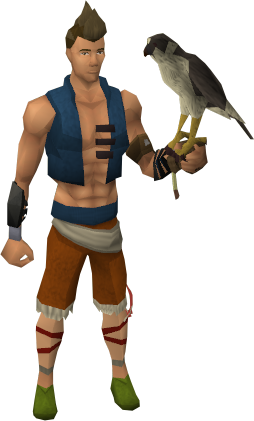 A player with a gyr falcon

Falconry is a Hunter technique requiring 43 Hunter. For a fee of 500 coins, hunters can rent a gyr falcon and a falconer's glove from the falcon expert Matthias at the Piscatoris falconry area. Both hands must be free for falconry (weapons, shield and gloves). With a falcon, players can hunt for spotted kebbits, dark kebbits and dashing kebbits. While the falcon is in flight, the kebbit may move resulting in a miss after which the falcon will return to the glove of the hunter.

When the falcon catches the kebbit, the hunter needs to retrieve both the falcon and the drops. A yellow arrow marks the location of the falcon with its catch. If the falcon is not retrieved within a short time, the player will get the message, "Your falcon has left its prey. You see it heading back toward the falconer." As long as the player is inside the falconry area, they may talk with the Matthias to get their falcon back without cost; however, no experience is given for the lost prey.

The kebbits have a relatively fast respawn, which gives impressive training speed. However, competition from other falcon hunters can substantially reduce speed and adversely impact training. Although the success rate is supposedly not affected by proximity, running up to the target before catching it may improve success rate. This is because success is strongly affected by whether or not the target is moving. Falcons travel at a definitive speed, so if it is further away then it is harder to predict when the target will be moving or not. Another reason is that if it fails, it takes much less time to return to the hunter which can seriously affect training time. Of course, the success rate is also based on the player's Hunter level.

The hides from the kebbits can be converted into fancy clothing items in the Varrock fancy clothing store. A player with level 40 Hunter is able to make all 3 sets. However, a higher level is required for wearing some of the clothing. With the Boots of lightness coupled with the Spottier cape and Penance gloves players can reduce their weight by 10–13 kg.

This information has been compiled as part of the update history project. Some updates may not be included - see here for how to help out!
Retrieved from ‘https://runescape.wiki/w/Falconry?oldid=33863099’
Category:
Hidden categories: