The Falador shield 4 is a reward for completing all of the Falador achievements, including the Elite tasks. It is obtained from Squire Asrol in the White Knights' Castle in Falador, and can be reobtained from him for free. It is one of the items that is always kept on (normal) death, although it can be lost in the Wilderness if not protected. 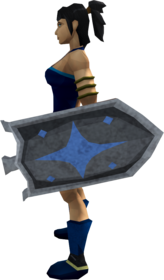