The Falador shield 3, also called the Tower shield, is a reward for completing the easy, medium and Hard Falador achievements. Players may obtain the shield from the Squire Asrol in the White Knights' Castle. If you have lost the shield, speaking to the squire will allow you to obtain a new one. It is one of the items that are always kept on (normal) death, although it can be lost in the Wilderness if it is not among the 'Items kept on death'

The shield has the defensive stats of a level 50 hybrid shield, but also gives a +5 prayer bonus. 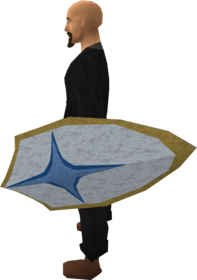