From the RuneScape Wiki, the wiki for all things RuneScape
(Redirected from Falador Farm)
Jump to: navigation, search
The Old School RuneScape Wiki also has an article on: osrsw:Falador farm

The Falador farm is a large structure south of the pristine city of Falador. It has many purposes and functions.

The farm is in some ways the crossroads of Asgarnia. It has a convenient location, near Draynor Village, Falador, Port Sarim, and Rimmington. There are several ways to reach the farm.

The most common way to get to the farm-Cabbage port.

The cabbages of the farm hopping up and down during the 2009 April Fools event.

The farm was the major host of the 2009 April Fools event, where cabbages would bounce up and down, with many random phrases appearing over their heads, such as "All Hail Brassisca Prime!" During the event, the patch was visited by many, each trying to obtain a cabbage for novelty uses. However, the cabbages would jump up and down, and bounce away if players tried to pick them up. This made it rather hard to obtain them, and many would get annoyed by chasing them around everywhere.

The Oversized Cabbage as part of the 2020 April Fools event.

The Falador cabbage patch served as the location of the 2020 April Fools event, where an Oversized Cabbage could be defeated. It dropped a cabbage boson upon defeat, which could be handed in to Dr. Cole at the entrance of the cabbage patch for a selection of rewards.

The Falador farm is home to many facilities, which can be used by players at their own liberty.

The farm is a good location for many low-levelled players to train while earning a modest profit from drops received. Of particular note are the chickens found wandering around the chicken coop. These are easily killed, and the chickens can be cooked in Port Sarim or Falador, allowing players to use them as food. However, raw chickens sell for a fair profit, almost rivalling that of cowhides, because of their use in Summoning, so players may want to sell them instead of cooking them. Also, chickens will drop feathers, which are valued for their use in Fletching, and bones, which can be buried to obtain Prayer experience.

If that isn't enough, there is also a large pasture containing several cows, which will all drop raw beef, bones, and their prized cowhides. The meat can be cooked in Falador or on a fire to be used as food, the bones buried, and the cowhides tanned and used for Crafting, or sold on the Grand Exchange to others wishing to train Crafting for a fair price. If players don't wish to cook the meat for food, they can also eat the cabbages that spawn in the patch nearby.

After the quest Bringing Home the Bacon has been completed, players may kill pigs in the storm cellar. 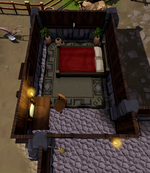 The Falador farm is a common place to trap penguins.

The main focus of the farm is most likely the Farming patches, which are used to grow crops. Found in the North-eastern edge of the farm, there is a Herb, flower, and two Allotment patches that can be used to train. Also, a Tool leprechaun will store various farming tools for you, and there is a Compost Bin nearby that can be used to make Compost, Supercompost, or rotten tomatoes. Elstan will watch over your crops for you if you pay him.

The tool leprechaun is a little different from the other leprechauns found everywhere, as she will not note any cabbages for you.

Besides that, Sarah nearby will sell players various farming items, such as sacks and baskets, but she only appears on member's worlds. 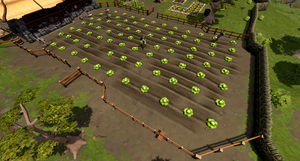 The update history project is a work-in-progress – not all updates to this topic may be covered below. See here for how to help out!
Retrieved from ‘https://runescape.wiki/w/Falador_farm?oldid=35368840’
Categories:
Hidden categories: