From the RuneScape Wiki, the wiki for all things RuneScape
Jump to navigation Jump to search
This article is about the promotion. For the character, see Faceless Assassin.

Faceless Assassins was a Treasure Hunter promotion running from 24 January to 29 January 2018. The player can open Treasure Hunter to receive an assassin's contract that can be clicked to begin the event. Ironman Mode players can instead collect the contract from Diango. Similar to the previous events, Death Lotus Training, Zodiac Training, Walk Like a Zombie, and New Year's Resolutions, the Faceless Assassins promotion features a checklist of time-sensitive tasks that players can complete to gain rewards. 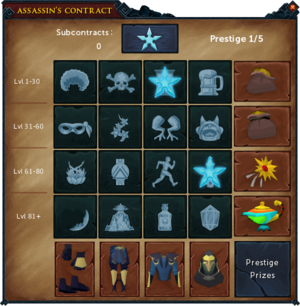 Although the Faceless Assassins event is open to free players as well, most of the tasks can only be completed on a members world or in members areas. Tasks may be skipped through the use of subcontracts, which can be won from Treasure Hunter. This is useful for free players who want to complete a single row (or column) and members who don't meet the minimum required level to complete a task.

After completing all of the tasks 5 times, players can no longer complete the tasks for rewards, and any subcontracts earned via Treasure Hunter can instead be used as a medium prismatic lamp.

The start of the promotion was indicated by the following login messages:

Tasks can be skipped instantly by using a subcontract.

Rewards are given for completing rows, columns or full tables at each of the four prestige levels.