Eyes in Their Stars

Eyes in Their Stars is a mystery encountered in the ruins of the Star Lodge cellar, at the Infernal Source dig site, in which the player learns the true history of the lodge. Solving the mystery completes the achievement of the same name.

It is not necessary to collect all the journal pages to gain access to the Dungeon of Disorder, but all pages are required to finish the mystery. 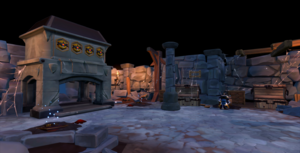 The restored fireplace, with four crests of Dagon, at the Star Lodge cellar.