From the RuneScape Wiki, the wiki for all things RuneScape
Jump to: navigation, search
The Old School RuneScape Wiki also has an article on: osrsw:Experiment cave 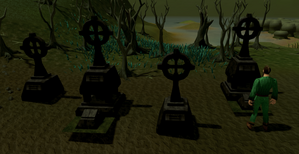 The concealed entrance to the cave.

The experiment cave is a large, underground structure which consists of two larger chambers and small paths. The entrance to this cave is concealed under a tombstone south-east of Fenkenstrain's Castle. One must push the eastern-most memorial (south-east of the castle) to enter. The cave can only be accessed during and after the Creature of Fenkenstrain quest. As the name suggests, many experiments inhabit this cave.

During the Creature of Fenkenstrain quest, players have to kill a wolf-woman experiment in order to obtain a cavern key. Then, the player navigates through the cave, opens the locked door using the cavern key and climbs up the ladder to a mausoleum. The player must then dig at the three statues located there, in order to gain the arms, legs and torso of Fenkenstrain.

After the quest, players may re-access the cave, however they will only be able to kill the sheep-wolf and spider-man experiments. Attempting to attack a wolf-woman experiment yields the message: "You don't have the heart to kill the poor creature again."

There are many ways to travel to this cave:

This information has been compiled as part of the update history project. Some updates may not be included - see here for how to help out!
Retrieved from ‘https://runescape.wiki/w/Experiment_cave?oldid=35567464’
Categories:
Hidden categories: