From the RuneScape Wiki, the wiki for all things RuneScape
< Evolution of Combat beta
Jump to navigation Jump to search 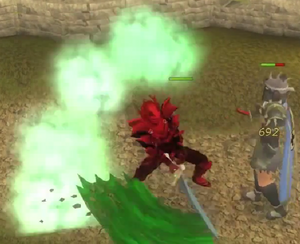 On 1 June 2012, Jagex posted a YouTube video detailing the June Behind the Scenes. This video included a mention of the combat update.

In the video, it could be seen that there are two distinctive types of melee hitsplats; it appears that those with red backgrounds are damage dealt with abilities, and those with transparent backgrounds are normal hits. A new type of hitsplat is also shown.

The combatants are shown to wield a rune 2h sword, dragon scimitar, what seems to be a plain longbow, bronze crossbow and staff differently than how they are wielded now. The "punchbag", the npc used to show off the abilities on, appears to be attacking with a dragon defender wielded in the right hand. However, in later videos, the "punchbag" character slashes with a chaotic rapier.

One of the melee combatants is also shown to be able to kick the opponent while wielding the weapon, as well as doing some form of shield-bash, both of which stun the opponent with a new animation. The life points bar above the character's head is shown to fade from green to yellow then away rather than disappearing abruptly when out of combat.

Both the ranger and the mage are shown to teleport for short distances with the warrior showing a similar dash attack as part of the shield-bash.

On 8 June 2012, Jagex posted a YouTube video. This video included a mention of the combat update, starting at 1:40. The commentary is with Mods Chris L and Hunter. In this video the new hit splats were discussed, confirming that the "no background" hits are normal auto-attacks hits, as well as the red background hit splats being ability hits. They also discussed some updated interfaces. 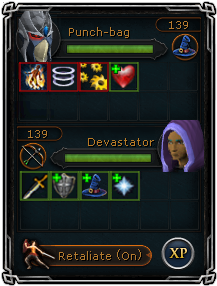 A new main interface, called the main tab was introduced in this video (image on the right). According to the commentary in the video, this new interface will be located in the top left of a player's screen along with a player's "chat head". The chat head has not yet been detailed. From this main interface, you will have access to your target's information, which can either be a player or an NPC. The information displayed will include their weaknesses, which will be located in the top right hand corner opposite their head icon, the target's life points percentage, their combat level, active prayers, and any positive (green outline) or negative (red outline) effects that are currently active on the target. On the bottom, it will show the player's own Life Points, as well as any positive or negative effects the player may currently have. Positive (green outline) means that a stat is boosted above it's regular level - known as a buff. In most cases, negative (red outline) means that the stat is below it's regular level - known as a debuff; however, there are other red outlined negative effects that are not stat debuff's, including stun, bleed, and burn effects. Located at the bottom of this interface is an auto-retaliate toggle (named simply, "Retaliate"), and a button leading to the Combat Experience interface. 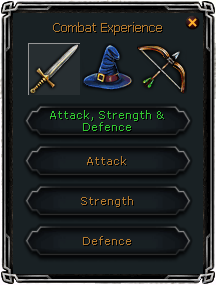 Another new interface that has also been revealed is the Combat Experience Sub-Tab. It can be accessed by pressing the "XP" button on the main tab, and it will allow the player to control how their XP is gained for each of the three combat styles. The interface is separated into three mains tabs: Melee, Ranged, and Magic. Each tab has 3-4 experience style toggles that can be activated, which will allow the player to gain certain types of XP. Based on the given information shown in the video, the toggles for each style are completely independent of each other - for instance, in the video, Attack (melee), Ranged/Defence (ranged), and Magic/Defence (magic) were all active at once, which are all different styles. It means, and was assumed by players (has now been confirmed) that they will now be able to train strength with weapons like an abyssal whip that currently don't offer such an option, thus resulting in the increase of the whip's price.

The example character in the video was shown to be using magic auto-attacks (which appear to be graphically updated water based attacks), with a bronze sword equipped. The character also uses a few magical abilities (one of which is the "choke" ability), and uses at least one melee ability - a stab to the belly that causes bleeding. Based on our available information, all of the abilities are Basic to Threshold, as all of the abililty effects shown in the video (stun, bleed) are caused by Basic to Threshold level abilities.

Also, a new icon for Protect from Melee was shown in the video.

On 15 June 2012, Jagex posted a third video, this time about the Evolution of Combat alone, which introduced the concept of Adrenaline and showed how the Action Bar would work

Adrenaline was described as a bar which will slowly fill up as you execute normal attacks, but will increase more when Basic or Threshold abilities are used. As the bar fills, you will be able to utilise more powerful abilities - when the Adrenaline bar is 50% full you may use Threshold abilities, and when it's 100% full Ultimate abilities become available.

Ultimate abilities themselves were also described in greater detail. When using one, the Adrenaline bar will completely deplete, thus preventing you from using Threshold or other Ultimate abilities until it recharges. Two Ultimate abilities, Meteor Strike, a melee ability in which you leap into the air and bring your sword down on your opponent, dealing massive damage and Tsunami, a magic-based ability in which you summon a massive tidal wave, inflicted massive area of effect damage upon any enemies within a large range in front of you.

The Action Bar allows you to assign skills from your ability set-by dragging and placing it onto the action bar - this replaces the Magic tab - onto twelve slots above your chatbox, which can then by utilised by either clicking on them or assigning hotkeys to them; the default hotkeys are 1-9, 0, - and =. You can also switch between different action setups by pressing Shift+1, 2, 3, 4 or 5, allowing you to store and easily switch between different action setups. It will NOT be preset, unlike many players think.

It also showed that after 15 seconds, the player would come out of "combat stance", and that a one-handed weapon and a shield would be put back automatically, sheathed. Jagex has not confirmed whether sheathing of weapons would be automatic or manual.

A new icon for Wrath was shown in this video.

On 22 June, 2012, Jagex posted a fourth video which was also only about the Evolution of Combat that gave players a first glimpse at Jagex's 'Big Reveal', dual-wielding. 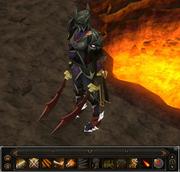 The first glimpse at dual-wielding.

Players will have access to a wide variety of mix-and-match combinations with new dual-wielding. In the video Mod Chris L and Hunter showed a character holding a Dragon scimitar in each hand, an Abyssal whip in one hand and an Enhanced Excalibur in the other, and two Rune crossbows just to name a few that were shown. Players will not be limited to one combat style of the weapons they may wield at one time, but can use any combat style weapon with another weapon of any combat style, i.e. an Abyssal whip with a Rune crossbow as shown in the video. Mod Chris L and Hunter did say, though, that two Abyssal whips will not be able to be equipped at the same time since they said that it was a "Technical limitation with how animated a whip can be." 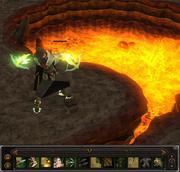 A character dual-wielding two Rune crossbows while doing an ability.

Wielding a weapon in the off-hand slot will require an off-hand version of that weapon. During the video, there's a short glimpse of what an off-hand Dragon scimitar may be called and what was shown was "Off-hand dragon scimitar". Mod Chris L and Hunter explained that these off-hand versions of weapons will be craftable and smithable, however, they will also be members-only.

In the video new equipment such as Magic orbs and Ranged shields were mentioned that will be added to the game. Certain abilities will require certain pieces of equipment to be activated. Staves of all kinds will become 2-handed. Weapons can be sheathed and unsheathed manually. The character models have been updated, with upgraded idle animations and fingers.

Along with the new interfaces, weaknesses and buffs will now have a more prominent effect on gameplay. According to Combat: Buffs and Weaknesses,
"There’ll also be changes to a whole host of RuneScape inhabitants to ensure that when a creature is weak to fire damage or stronger against ranged attacks, for example, it will have a more significant effect - particularly on your combat style and equipment setup."[1] From what is shown in the second youtube video, weaknesses will be represented by icons in the main tab interface, opposite the target 's head icon—the player's weaknesses will also be located opposite their head icon. Currently, only one weakness has been shown per target/character. 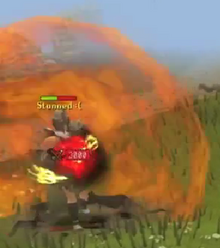 Currently from the images Jagex has released, as well as update hints, the following updates could be released:

This is a list of expected updates as stated in "Og Blog: Evolution of Combat."[11]

In the second Og Blog, more information was mentioned. This blog was focused on the objetives of player based skill, fun, equipment rework and more, Blog: Skill, Variety and Fun