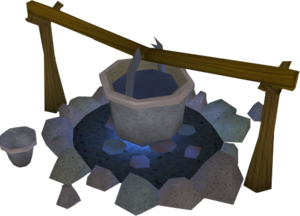 A fishing net may be collected from the beach between the fishing areas, but will not be kept on leaving the island. Catch the correct "fish-like thing" as told by the Servant and use the uncooking pot to make it raw. Talk to Bob and he will eat it if it was caught from the correct area. If you use a cooked shark, the same applies to salmon and is assumed to apply to all fish on the uncooking pot you will get a message that says something like "you need level 50 in uncooking, wait you dont have that skill" Using a raw fish on the pot will result in "this is already raw".

If the fish was caught from an incorrect area, Bob will eat it, then say it is disgusting. Each time you feed Bob an incorrect fish, it will take one more fish to get him to fall asleep, and you must keep going to the slave and catching fish to uncook and feed to Bob. For example, if you feed Bob one incorrect fish, it will take 2 correct fish to get him to fall asleep. Making 2 mistakes will require 3 fish to lull him to sleep, and so on.

When the fish has been consumed, Bob falls asleep and the player must escape through the portal, receiving some fishing experience, or in some cases, magic experience depending on the action being performed.

When you leave, you make a raspberry emote at the sleeping Evil Bob shouting "Be seeing you!", (a reference from British TV show 'The Prisoner') and then you teleport back to where you were before the random event. In one of the postbags from the hedge, Evil Bob gives some insight into the land of ScapeRune. Instead of goblins fighting and bickering, they constantly agree and compliment each other. (e.g. "Splendid tie!", "You are completely right!"). Also, there is a ScapeRune version of the Evil Chicken, the cheery old chicken. According to Evil Bob, he makes you "want to swallow a hairball and enjoy it."

Originally, on getting to the island, the player was only able to speak cat and required an "amulet of manspeak" from a chest in order to talk to one of the two slaves. While this was an example of Jagex humour based on the amulet of catspeak, it was not obvious to players who knew nothing about cats. Now, if you ask Evil Bob how he can talk to you, he'll tell you that he is wearing an amulet of humanspeak, quite contrary to what it was like then, where you had to get it. This also adds in another piece of Jagex humour on the amulet of catspeak in RuneScape. In ScapeRune, Evil Bob is wearing an amulet to talk to humans, attempting to teach the human slaves catspeak, while in RuneScape, humans use the amulet of catspeak, attempting to teach cats humanspeak.

Originally four fish (of the correct variety) were required to leave, later two and now only one.