From the RuneScape Wiki, the wiki for all things RuneScape
Jump to navigation Jump to search
"Everlight" redirects here. For other uses, see Everlight (disambiguation).

The Everlight Dig Site is a former icyene settlement located east of Meiyerditch. Upon reaching level 42 Archaeology, players are given the Everlight invitation and are able to excavate the ruins. Vanescula Drakan will task the player with extinguishing the Everlight lighthouse at the centre of the area and claiming the Saradominist temple. Access to Morytania is required by either killing the ghoul beneath Paterdomus or by partial completion of the Priest in Peril quest.

The icyene homeworld, Hallow, is one in which the sun takes an entire Gielinorian year to set. As a result, the nights in Hallow are incredibly dangerous, with few icyene being known to have survived them. This forced them to move their settlements in order to stay in the light of their sun, but it also left them with a fundamental fear of the dark. When Saradomin brought the icyene to Gielinor during the Second Age, they reacted with fear and shock when faced with a faster-moving sun, even though their arrivals were arranged to occur within daylight and the nights in Gielinor were much shorter and far less dangerous.

In order to facilitate their acclimation to their new home, Queen Efaritay Hallow ordered the construction of a tower on a small peninsula near where their city was being built, styled after the main tower in New Domina, where Saradomin placed a mote of his power to turn it into a permanent beacon of light. The icyene, hoping that it would stand for all time, named it Everlight.[1]

To further accommodate the migrating icyene, many projects were instigated to make the settlement more homelike, such as the construction of a graveyard, an amphitheatre and a sports arena where regular games could be held, with the idea that in time other friendly races could be invited to participate. Eventually, other settlements were built for their human allies in order to foster fellowship and show that they could live together. In honour of their queen, the icyene named the land Hallowvale.[2]

Hallowvale stood for many centuries, until Lord Lowerniel Vergidiyad Drakan personally led an invasion in an attempt to seize the land for himself. With most of Saradomin's forces occupied attempting to besiege Senntisten in the west, Drakan's forces were able to push all the way to Everlight, where Archon Bable attempted to hold the line.[3] Eventually, Drakan was able to slip past the defences, breach Efaritay's castle during the night and kidnap her human husband, Ascertes. In response, Archon Bable ordered Hallowvale's military to retreat further to the east. Left with no other options, Efaritay was forced to surrender to Drakan.

Before this, however, she instructed her civilian subjects to flee and left her young son Safalaan to his carers, hoping that they could smuggle him to safety. Her royal guard, however, refused to leave her side, despite knowing that staying was suicide. To prevent Drakan from reaching the Everlight, Efaritay instructed them to sabotage access, knowing that vampyres despised the light and would try to destroy the tower.[4] These events marked the Fall of Hallowvale; Lord Drakan and his vyres conquered the rest of the region and renamed it Morytania. Eventually, he sank the Everlight, along with the peninsula it stood in, beneath the waves.

Millennia later, during the Sixth Age, Everlight arose from the sea, with most of the surrounding buildings reduced to ruins. However, for unknown reasons the beacon began to shine even brighter than before. This proved an inconvenience to the vampyres of Darkmeyer - particularly Vanescula Drakan, who was unable to sleep. Having forged an uneasy alliance with Efaritay, Safalaan and the Kingdom of Misthalin not long after the death of her brother, she agreed to oversee the excavation of the site, Efaritay refusing the task because the place brought back painful memories. Vanescula then tasked the World Guardian with shutting down the beacon or, at the very least, decreasing its intensity.

While excavating, the World Guardian was able to find several items of importance, most notably a gold dominion medal, which they gave to Padomenes after finding several entries of Padosan, who was his younger sister. Padomenes thanked the World Guardian for the memento, and told them that a kantharos cup would be required to take the light away.

After uncovering an underground tunnel leading beneath the lighthouse, repairing the mechanism powering the elevator and using several buckler shields uncovered across the dig site to open access to the beacon, the World Guardian was finally able to reach the Everlight. Though they were able to seize a fragment of its power, they were ultimately unable to power it down. While Vanescula was visibly disappointed, now that the beacon was accessible she opted instead to find a way to cover it up.

There are a variety of ways to travel to the Everlight dig site:

The base camp of the dig site is located just east of Meiyerditch. It houses a bank chest, an archaeologist's workbench, and a material storage container. Vanescula Drakan can be found in this area, acting as the site's manager.

The mass grave is located east of the entrance to the dig site, accessible by skipping over a scaffold.

There is the Everlight - Mass grave excavation site, a fishing spot (for raw lobsters, raw tuna, and raw swordfish), and a materials cart there.

Archaeologists and trainees can be found in this area.

A mound of earth acts as the starting point of Lions and Unicorns and Centaurs, Oh My! research.

The excavation hotspots and material caches within this site have a chance to give the icyene remains.

The amphitheatre is located north of the mass grave, accessible by traversing a bridge.

There is the Amphitheatre excavation site, a materials cart, and the statue of Mesomedes there.

The amphitheatre stage acts as the starting point of Ode to a Midsummer Morning research.

The excavation hotspots and material caches within this site have a chance to give the prodromoi buckler. The buckler is guaranteed to be dropped at level 105 Archaeology.

The dominion games stadium is located east of the mass grave.

There is the Dominion Games stadium excavation site, three fishing spots (two for big net fishing and raw sharks, and one for raw lobsters, raw tuna, and raw swordfish), and the statue of Padosan there. A cliff may be traversed between the northern and southern parts of the area.

An archaeologist can be found in this area.

A stadium column acts as the starting point of Stadio Ga Ga research, and two golden hoops off the shore can be interacted with a gnomeball for From Across the Keramos achievement.

The excavation hotspots and material caches within this site have a chance to give the optimatoi buckler. The buckler is guaranteed to be dropped at level 105 Archaeology.

The oikoi (households) is located south of the mass grave, accessible by climbing over some rubble and jumping over a broken doorway.

There is the Oikoi excavation site, three fishing spots (one for big net fishing and raw sharks, and two for raw lobsters, raw tuna, and raw swordfish), the statue of Hebe, and the statue of Tromple there.

A partial statue, just east of the Oikoi evacuation site and towards the Statue of Hebe, is the starting point of Home, Sweet Home research.

The excavation hotspots and material caches within this site have a chance to give the psiloi buckler. The buckler is guaranteed to be dropped at level 105 Archaeology.

The acropolis is located south of the oikoi (households), accessible by traversing a plank.

There is the Acropolis excavation site and a materials cart.

Archaeologists can be found in this area.

A stone tablet acts as the starting point of Ground of the Polis research.

The excavation hotspots and material caches within this site have a chance to give the hetairoi buckler. The buckler is guaranteed to be dropped at level 105 Archaeology.

There is a cave accessible from the acropolis, requiring partial completion of Hallowed Be... mystery. It contains a sign for Writings on the Walls and the Underwater cave excavation site.

The excavation hotspots within this site have a chance to give the mosaic pieces. 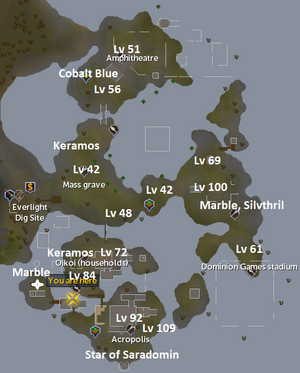 A map of Everlight excavation hotspots.

There are 17 achievements in this group.

There are several statues around Everlight which can be restored using ten unnoted white marble for an experience drop and a reward. After restoration, a different item may be added to each for further rewards. After adding the item, they act as an altar. Restoring and claiming from all statues will unlock the No Secrets Left to Steal achievement.