From the RuneScape Wiki, the wiki for all things RuneScape
Jump to: navigation, search
Not to be confused with Ava.
For the architect and engineer, see Eva.

Lady Eva Cashien is a high-ranking member of the Order of the Temple Knights, an elite and secretive Saradominist military force. She is notable for being the niece of their recruiter, Sir Tiffy Cashien.

She plays a large role in Salt in the Wound, as she is one of the four people who are responsible for the death of Mother Mallum, along with Kennith, Ezekial Lovecraft, and a Proselyte knight.

During a meeting attended by Saradomin in Azzanadra's Quest, Eva is one of the Temple Knights to become a follower of their 'true master' Zaros after Trindine uses the Frostenhorn to amplify residue of Zaros's loyalty aura, and Zaros subsequently teleports away with her and most of the other Temple Knights. She is last seen training in Kharid-Et.

Eva's parents were killed when she was very young. Afterwards, her uncle Sir Tiffy Cashien took her in and raised her as his own child. After a brief battle with depression, she decided to use her abilities to fight for order, in the hopes that she could prevent any atrocities so that no one would have to feel like she once did.[source needed]

When she became of age, she enrolled with the Temple Knights, despite Sir Tiffy's strong reluctance due to his moral obligation to protect her. Regardless, she enrolled anyway because she felt there was too much evil on RuneScape, and that somebody needed to fight it.

Eva followed the adventurer's progress through mission reports. When the opportunity arose, she volunteered to fight by their side. 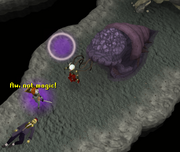 Eva is very sensitive about her gender. She argues that even though she is a woman, she can wield a sword better than any other Temple Knight.

Eva has a soldier's mentality. When given orders by the player, she will say, "What's the order?" Additionally, when asked how she is doing by the player in Daemonheim or the Slug Citadel, Eva will try to cover up her injuries, presumably so as not to slow down the rest of the group. Eva has a sense of honour which the sea slugs violate when they use the animated corpses of White Knights to defend their citadel, for which reason Eva becomes angry when she first sees them.

Eva is aggressive and enjoys fighting, as long as she is not fighting a magic user. If the player orders her to attack an enemy, Eva will shout "You're going down!"

In addition, when Mayor Hobb tells her that he will not let her pass, Eva takes great pleasure in knocking him out. Eva also shows great courage, holding back multiple Risen Knights at once and taking on Mother Mallum single-handedly. 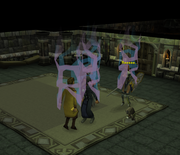 Despite first appearances, however, Eva is modest. If the player chooses her to cross the chasm in Daemonheim to get to the Seeker of Truth, the player gives her a compliment after she crosses back, to which she replies, "All in a days work."

Eva also dislikes magic. It is possible that Eva is even afraid of magic, as she screams when she is teleported and seems afraid of Mother Mallum only when Mother Mallum attacks her using magic.

Eva originally dislikes Kennith because he is a mage and stubborn. She also believes that Kennith should be enjoying his innocence instead of hurrying to get rid of it. After the two of them work together to defeat Mother Mallum, however, Eva admits reluctantly that Kennith is not so bad after all.

Eva also says that she likes Ezekial, stating that he is "pretty tough."