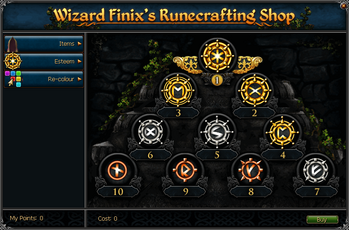 The 10 different tiers of Esteem

One can buy Esteem in Wizard Finix's Runecrafting Shop on the roof of the Wizards' Tower. There are 10 tiers of Esteem that can be bought. Once Esteem is purchased, the runic symbol for that Esteem can be neither replaced by a lower tier symbol nor removed. Unlike when re-colouring the robes through Finix's shop, the Esteem is shown on all pieces of the wicked robes regardless of whether they are worn or later purchased.

After buying one tier of Esteem, the higher tiers will be reduced by the price of the Esteem you just bought. For example; if you buy a tier 10 Esteem (15 points), a tier 9 Esteem will only be 45 points instead of the original 60 points.

Esteem rank one is required for the trimmed Completionist cape.