From the RuneScape Wiki, the wiki for all things RuneScape
Jump to navigation Jump to search
Item JSON: {"edible":"no","disassembly":"no","stackable":"yes","stacksinbank":"yes","death":"alwaysinclwild","name":"Essence of wisdom","bankable":"yes","gemw":false,"equipable":"no","members":"no","id":"31717","release_date":"1 August 2014","restriction":"limited","release_update_post":"Treasure Hunter – Totems of Wisdom","lendable":"no","destroy":"Are you sure you want to destroy your Treasure Hunter prize? You cannot reclaim it.","highalch":false,"weight":0,"lowalch":false,"tradeable":"no","examine":"Use this to summon a totem of wisdom which gives extra XP to yourself and any attuned players nearby.","noteable":"no"} 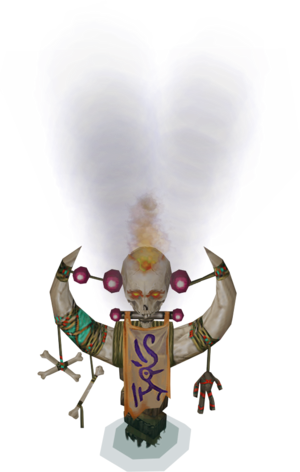 A totem of wisdom.

The totem of wisdom allowed other players to attune to an individual player's totem to receive bonus experience, while giving the owner of the totem a 4% bonus to experience per player attuned to it. The maximum amount of experience an owner of a totem could receive was 20%, and up to ten players could have been attuned to one totem at any given time.

Players attuned to this totem would receive bonus experience equal to 10% of how much experience the owner gained from the totem. The skill chosen is the same skill as the owner trained while the totem was active.

Previously when a totem ran out of experience and there was another essence of wisdom in the player's inventory, the totem would automatically recharge itself with the following message:
Your totem has been recharged with [EXP] XP using an essence of wisdom.

Attempting to use the essence of wisdom during a bonus XP weekend would yield the message "You can't summon a totem when you're getting double XP."

When a totem was active it had a limited range in which it was effective. If the player moved outside its range the totem would be destroyed and any bonus lost.

As of 7 April 2015, players can convert this item into pulse cores. However, totems of wisdom can no longer be summoned. As of 26 June 2015, two essence of wisdom are converted into one advanced pulse core instead.

This information has been compiled as part of the update history project. Some updates may not be included—see here for how to help out!
Retrieved from ‘https://runescape.wiki/w/Essence_of_wisdom?oldid=35688865’
Categories:
Hidden categories: