From the RuneScape Wiki, the wiki for all things RuneScape
Jump to: navigation, search
The Old School RuneScape Wiki also has an article on: osrsw:Eric
This article is about the member of Denath's cult. For the tramp on Jatizso, see Eric (Jatizso).
Eric? (edit)? (edit) 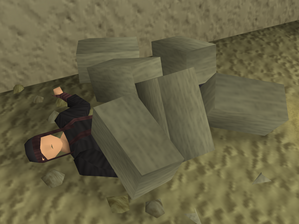 Eric is a dark wizard who followed Denath in summoning Agrith Naar. He wanted to gain demonic powers in order to force people to notice and like him, including a woman who he was attracted to.[1]

After Agrith Naar was summoned, Eric fled the ritual chamber and was killed by falling rocks. This greatly upset Evil Dave, who demanded Agrith Naar be killed in order to avenge his friend.[2]