From the RuneScape Wiki, the wiki for all things RuneScape
Jump to navigation Jump to search
The RuneScape Classic Wiki also has an article on: classicrsw:Knife bug 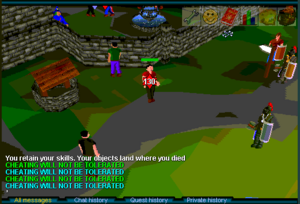 A player dying because of usage of the knives in the wilderness.

The equipable knife bug was a bug that appeared in RuneScape Classic in 2002 that allowed players to equip multiple normal knives, which were not intended to be wieldable anymore. If a player walks in RuneScape Classic and attempts to drop an item, it will not drop until the player stops walking. The glitch took advantage of this, players would put a wieldable item in their first inventory slot and fill the rest with knives. Next, they would walk somewhere and click to drop the item. Before they stopped moving, they right click the first slot again. When the item dropped, the rest of the inventory fills the gap and the right click menu would be over a space with a knife in it now. If the wield option was clicked, a knife was wielded and its stats were added. As many as 29 knives could be wielded at once, as well as a regular weapon in the final slot, allowing for incredibly high hits if the bug was abused properly.

This bug could be used to wield any item, but since other non-wieldable items had no stats, there was no point to do it other than silly screenshots of a "wielded" gp pile or ball of string. The only reason the knife mattered is because it was actually a weapon with stats on release of the game, and the stats were never internally removed from the item when the wield option was taken off the item.

To punish players, Jagex set up a script that did the following:

When Jagex took manual action, players who player killed with the knives were permanently banned for bug abuse, while players who trained with them were temporarily banned.