When fighting the ice titans, the fight can be made easier by using a combat summoning familiar. Some familiars such as the Fire titan can deal damage in the multiple 600's. Fire attacks are best for player damage dealing with these monsters, and one should try to use the trees west of the stone as a means of trapping them (so you don't get frozen when Lucien attacks) or try and tank while your Fire titan deals with them.

Other than combat familiars, it appears that Dreadnips also receive a damage boost when attacking the enhanced ice titans, and can hit up to 900s, despite they are said to be unavailable for quest boss fights. One could consider bringing them to quicken the fight further. 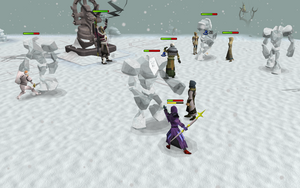 Battling the ice titans, while Lucien flings nasty spells at you.

During this stage in the quest, the player receives a huge boost to all combat stats and so it is highly recommended to take advantage of this by training combat on the Titans, and since it is very easy to return to one's gravestone, death is not an issue; but to make this training truly effective, the player should stop attacking when the last Titan is low on health and allow themselves to be killed so the wave can start again.

This information has been compiled as part of the update history project. Some updates may not be included - see here for how to help out!
Retrieved from ‘https://runescape.wiki/w/Enhanced_ice_titan?oldid=35640895’
Categories:
Hidden categories: