From the RuneScape Wiki, the wiki for all things RuneScape
Jump to navigation Jump to search
This article is about Divination craters. For the 2017 Christmas activity, see Energy rift (2017 Christmas event).
Energy rift? (edit)? (edit) 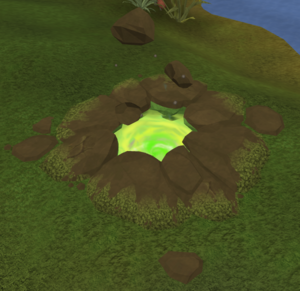 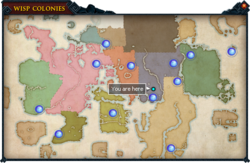 Energy rifts are rips in the integrity of the earth of Gielinor. They play a vital part of training the Divination skill. At an energy rift, a player may deposit various memories from harvesting the different kinds of wisps and springs, in exchange for divination experience. There is an energy rift present at every wisp colony. There is also a rift in the starting room of every dungeon in Daemonheim. According to their examine, depositing energy and memories will help restore the damage done to Gielinor. An energy rift is also found in the Elder Halls on Freneskae.

Players have three different choices on how to configure the energy rift's memory conversion:

Depositing only memories is the choice done for general training while still keeping energy for making special objects, but depositing memories along with energy is the method of choice for those who want optimal experience without other items or for those who don't care for items or profit.

A player depositing memories into an energy rift.

Every hour, an announcement will appear saying that a Guthixian Cache has opened. Energy rifts (excluding the Energy rift near the Pale wisp colony) for the next 10 minutes will have a new temporary option when right-clicked displaying "Enter cache", as well as the rift changing colour. Entering the cache will begin the Guthixian Cache Distraction and Diversion.