From the RuneScape Wiki, the wiki for all things RuneScape
Jump to: navigation, search
The Old School RuneScape Wiki also has an article on: osrsw:Enchant Crossbow Bolt

The Enchant Crossbow Bolt spell is used to give gem-tipped crossbow bolts special powers that have a chance of activating upon impact. Although Enchant Crossbow Bolt is listed as one spell in a player's spellbook requiring 4 Magic to cast, it is actually 22 different spells, each one requiring a different Magic level and different runes. An update made it impossible to enchant in Soul Wars. If you are wearing the Varrock armour 4, then you are given 5 free bolt enchantments per day, up to and including ruby bolts. When you have completed the Seer's Village Elite Tasks all enchanted bolts will have a 2% increased chance of triggering the special. Each spell enchants a set of 10 bolts. 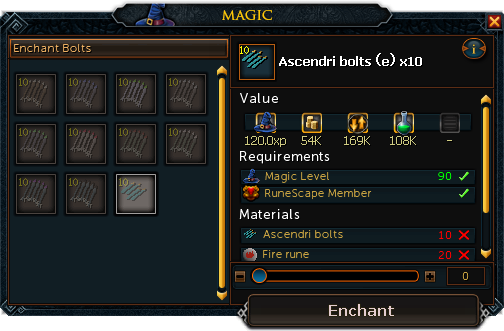 The interface of the spell Enchant Crossbow.