Enakhra's Lament is a quest which takes place in an old temple beneath the Kharidian Desert. It is the first quest to feature the Mahjarrat Akthanakos and Enakhra.

Lazim the sculptor has a sad tale to tell - his days of making art are over, and now all he can do is carp at adventurers as they make a statue for him in the desert. Although, isn't just south of the Bandit Camp an odd place to be putting up a statue?

Help Lazim out with his artistic endeavours, and learn more as this quest goes deeper into the history of RuneScape than you might expect.

See Enakhra's Temple for maps of the temple that features in this quest.

Speak to Lazim at the north perimeter of the desert quarry, located just south-west of the bandit camp lodestone; home teleport can be used for quicker travels during the quest, provided Desert Treasure is completed.

Lazim proclaims that he was a proficient sculptor, crafting statues for royalties all around Gielinor, until he met with an accident that impaired his ability to showcase his talents. However, his passion for sculpting still burns as bright as ever, and he wants to construct a spectacle in the arid contrast of the desert.

Since he cannot work with a chisel anymore, he requests your help to construct the statue. Agree, and he'll tell you to get 32 kilograms of sandstone from the nearby quarry to start working. 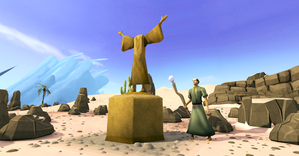 The statue needs a head.

Lazim will not take more than 32 kg, so if necessary, break up your blocks with a chisel. Give him the sandstone chunks, and he'll combine them to make a 32kg sandstone block and hand it back to you. Craft the huge block into a sandstone base, show it to him, and use it on the flat ground next to him.

For the statue form, Lazim tells you to get another 20 kg of sandstone. Pass him the remaining sandstone and he gives you a 20kg block. Craft this second block to make a sandstone body and attach it to the base. As the figure is still rough, you must further chisel the body to add the finer, intricate details.

Lazim tells you that the statue is almost complete, and that the wonder only requires a head now - he decides to leave the choice of the muse up to you. Your options include Lazim, Icthlarin, Zamorak or a camel; you also have the choice of using your own head, but Lazim refuses to allow it. To create the head, mine a 5 kg block of granite from the quarry and chisel it into a visage of your choice.

You will need to create another head later, so mine a second 5 kg block of granite but do not chisel it yet.

Place the completed head onto the statue; suddenly, unable to bear the weight, the ground collapses beneath the site of the statue and Lazim pushes you into the gaping hole.

If you need to leave the area, you can do so by climbing the ladder near Lazim, then climbing the sand pile. There is a rock directly east of the former statue location that will grant you access back in the temple. 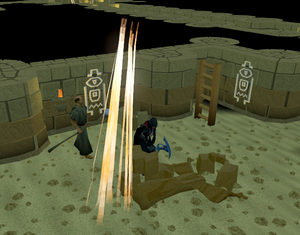 You find yourself in an ancient temple, the statue shattered and Lazim standing beside you. Confront him, and he'll confess that he isn't really a sculptor, and that he had you construct the statue solely to access the temple. You start to leave, but Lazim entices you, offering a portion of whatever they find in the temple.

You agree to stay, and Lazim explains that the treasure can be found at the top of the temple and to reach it, you must first pass the unique doors on the current level; instead of keys, 'limbs' must be used on each entrance to unlock it. Lazim tells you to salvage the broken statue to obtain the required appendages.

While you're here, ask Lazim for the statue head as you'll need it in the next section.

Take the silver M sigil off the nearby pedestal, and use a chisel to carve out a stone left arm, stone right arm, stone left leg, and stone right leg from the statue. Go north and go around the dungeon floor by walking in a counter-clockwise circle; attempt to open the doors that you come across, and the appropriate limb will automatically be used to unlock it. Watch the cutscenes of Enakhra and Akthanakos, and take the R sigil, K sigil, and Z sigil in the respective chambers; these, with the M sigil, make up the consonants of Zamorak.

One of the many halls in Enakhra's temple.

After you've unlocked all of the outer doors, proceed towards the heart of the floor and use the corresponding sigils to unlock the inner doors. Climb up the ladder there and you'll find yourself faced by a magical barrier, and another pedestal. Place the statue head that Lazim gave you on the pedestal; the skull fits except for "one gap at the end."

Lazim now appears next to you. When you tell him about the strange visions, he explains that they were traps set to disorient any unwanted visitors. Lazim tells you that the treasure is still a floor up, and you must pass the magical barrier to reach it, which can be brought down from the four enchanted rooms on the floor.

Each chamber on the floor represents a globe on the pedestal, which are based on the four classes of the Ancient Magicks spells. You must light each of the globes before you can pass the magical barrier and progress further. The recommended order in which the rooms should be solved are:

A player completing the wall

After all the four globes are lit, you'll be able to pass through the barrier. Climb up the ladder and talk to Lazim, who artlessly tells you to be cautious of the traps ahead. Head south and climb over the pile of bones.

Climb down the stone ladder and speak to the boneguard, who tells you that it was put under Enakhra's control, the coward who hides in the temple after being rejected by the Dark Lord. The boneguard asks you to help weaken her grip over him by completing the wall between them and sealing her in her own temple. 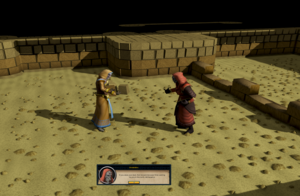 Agree and take three sandstone blocks from the nearby pile of rubble and use them on the wall, using your chisel to trim each brick after you set it up.

Once you've built the wall, Enakhra wails out; the boneguard thanks you, before changing form and revealing himself to be the Zarosian Mahjarrat, Akthanakos. A final cutscene plays, wherein Enakhra easily breaks through the wall and confronts Akthanakos, threatening him for destroying Zamorak's weapon and taunting him. After their short verbal bout, they both teleport away towards North. 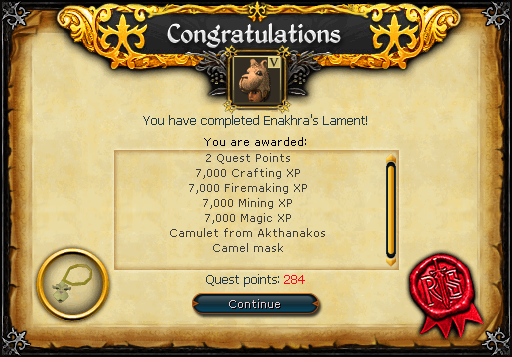