From the RuneScape Wiki, the wiki for all things RuneScape
(Redirected from Empty throne room)
Jump to: navigation, search
Not to be confused with Senntisten Temple. 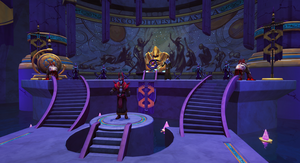 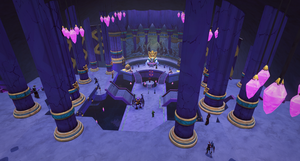 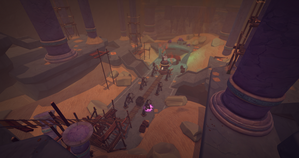 Agility is trained at one of the six Manual Auto-cycles in the centre of the throne room. Cycling on an Auto-cycle will give Agility experience drops every 1.8 seconds (3.8 experience at a time), which are ten times higher (38.2 experience) if using an empowered Auto-cycle. The two Auto-cycles in the middle are operated by NPC workers and cannot be used by players.

As the empowered Auto-cycle changes quite consistently, it is possible to perform this task semi-afk by setting a timer at an interval of ~41.41 seconds to ring, giving enough time to change the cycle and profit off the 900% experience boost. (This is the timer as of May 13, 2020, updated from the 1:00-1:04 minute timer used previously.)

At the top of the throne room, where one enters, there is a crystal storage bin where players can extract Senntisten crystals. There are four types of coloured crystal which they can be transmuted into - yellow, green, blue, and red. Each of these colours has a corresponding box that they must be deposited into. All colours give 1.9 experience per crystal when transmuting (19.8 experience per crystal if that colour is empowered). Depositing gives the same amount of experience whether empowered or not.

The mural on the eastern wall.
Retrieved from ‘https://runescape.wiki/w/The_Empty_Throne_Room?oldid=35534053’
Categories:
Hidden categories: