The elysian spirit shield is a ranged shield. It is made by attaching an elysian sigil, a very rare drop from the Corporeal Beast, to a blessed spirit shield. This process requires 90 Prayer and 85 Smithing, as well as completion of Summer's End. Players without the required skill levels to create the shield may ask Brother Bordiss in the Edgeville Monastery to combine the sigil and the blessed spirit shield, for a fee of 1,500,000 coins. 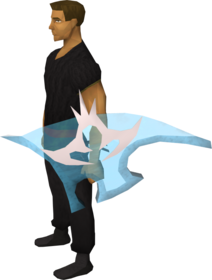 Like the Arcane and Divine spirit shields, the Elysian spirit shield reduces all incoming damage by 30%, and 50% of the blocked damage - after damage reductions provided by Defence level, armour, and Protect from / Deflect prayers and curses - is drained from prayer points. For example, a hit of 1,000 would be reduced to 700 and 150 prayer points would be drained. This effect only works if the player has adequate prayer points; without any prayer points the effect will not work. This effect does not reduce typeless damage, though it does work on Telos' "So much power!" attack.