From the RuneScape Wiki, the wiki for all things RuneScape
Jump to navigation Jump to search
The Old School RuneScape Wiki also has an article on: osrsw:Elven Clans 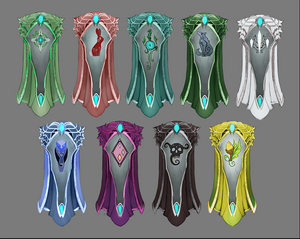 Concept art for clan capes, from top left to bottom right: Cadarn; Hefin; Meilyr; master clan cape; Ithell; Amlodd; Trahaearn; Iorwerth and Crwys. Note that the Cadarn cape changed because it appeared to be too Saradominist.

The Elven Clans are a collection of elven families from Tarddiad. The elves are divided into clans by bloodline, although it is possible for clans to adopt elves whose heritage is unknown. Each clan specialises in a particular art or craft, thus complementing one another. The clans are led by an elf bearing the honourary title of Lord or Lady, and these are chosen mostly on a meritocratic basis.

Eight elven clans are known to have been brought to Gielinor through the World Gate by Seren and Guthix during the First Age.[1] When Prifddinas was constructed from crystal, each of these eight ancestor clans received its own district within the city, complete with a crystal tower connected to the Tower of Voices.[2] Since then, other elven families have emerged, although these all fall under auspices of one of the eight original clans.

The clans ruled over Prifddinas equally, through the Elven Council of Elders, through the Second, Third, and part of the Fourth Age. When the Elven Civil War began, the majority of the elven race was forced to retreat into Isafdar as the Iorwerth Clan conquered Prifddinas and slaughtered all resistance. The Battle of Prifddinas also saw the fall of the Cadarn Clan's empire east of Arandar, from which point onwards the elves have been isolated in Tirannwn. As a result, the elves lost much of their inter-regional significance as humans, goblins and gnomes gradually took over the space the empire had once occupied, and have become legendary in many parts of the world.

The clans are said to differ greatly in lifestyle and nature, but little of this has been made common knowledge. Each clan specialises in a certain skill or technique at which they excel. For example, the Iorwerths are accomplished warriors, while the Ithell are renowned for the crystal singing and crafting skills.

The Amlodd are a spiritual clan, with connections to both the Spirit Plane and the world's Anima Mundi. Their leader, Lord Amlodd, is even able to travel to the Spirit Plane at will and spent most of his time there during the Elven Civil War. Their name translates to "one who is close to nature" in the common tongue.

The Cadarn are a military clan and have been tasked with the protection of the other seven clans. They are renowned archers and magicians in particular. In the Fourth Age, the Cadarns spearheaded The Break Out and the construction of Pass Arandar, after which their leader, King Baxtorian, founded an empire in the east, establishing peace treaties with humans and gnomes. In this empire, elves of many clans lived in harmony until The Great Divide occurred and the Cadarn found out about the Iorwerth treachery. They fought to reclaim Prifddinas but failed, and Baxtorian "buried himself" beneath a waterfall at the loss of his wife Glarial.

Following this, Arianwyn became Lord Cadarn and led his clan back to Isafdar, where they went into hiding to avoid assassination by the Iorwerths. Their name translates to "strong" or "powerful" in the common tongue.

The Crwys are very closely affiliated with nature and practise botany and farming. Led by Lord Crwys, who appears to be part tree himself, they have always taken care of the plants and trees in Tirannwn. An ent named Coeden, in addition to a very large Spirit Tree, are also associated with the Crwys Clan. Their name translates to "cross" in the common tongue.

The Hefin are a deeply spiritual clan who connect most to Seren, and they also have the highest agility and dexterity of all clans, led by Lady Hefin. At the end of the Third Age, the then-leader of the Hefin Clan designed the Temple of Light to contain the Dark Lord and protect the death altar. In Prifddinas, they have a large cathedral situated atop a high mountain. Their name translates to "summer" in the common tongue.

The Iorwerth are a clan of melee warriors, slayers and assassins. They initiated the Elven Civil War when Lord Iorwerth captured and took over Prifddinas in the Fourth Age. From that point onwards, they hunted down the other clans in an attempt to prove their worth and rule the elven race. The other clans formed a rebel alliance against Lord Iorwerth and the elven elders even reverted Prifddinas to its crystal seed form to protect it, forcing the Iorwerths to live in camps.

Lord Iorwerth then began to work towards the summoning of the Dark Lord so that his power could be used to re-sing the city without the other leaders, who had gone into hiding. Tasked with this, the Prifddinas Death Guard took over West Ardougne with consent of the treacherous King Lathas Ardignas in order to gain access to the Temple of Light. The rebel elves thwarted this plan, however, and managed to restore Prifddinas while the Iorwerths and the Death Guard were distracted by an attack of the Tyras Army. The many deaths caused the Dark Lord to appear, however, but he was defeated by the rebels, though not before he killed both Lathas and Lord Iorwerth.

With Prifddinas restored and the civil war ended, the Iorwerths rejoined the other clans, with Iestin of the Edern family as their new leader, since Lord Iorwerth's cousin Morvran had relinquished the position. Their name translates to "fair lord" in the common tongue.

The Ithell are a clan of craftsmen especially renowned for their crystal singing skills. Lady Ithell constructed Lletya to harbour the rebel elves during the civil war, but died shortly afterwards. At the end of the war, Kelyn Ithell inherited her memories and became the new Lady Ithell. Their name translates to "generous lord" in the common tongue.

The Meilyr are explorers and herbalists, known to experiment with various potions and ingredients. Using her knowledge of spelunking, Lady Meilyr managed to hide in an isolated part of Daemonheim after reverting Prifddinas, where she experimented with the dungeon's rare and unique herbs. Their name translates to "head ruler" in the common tongue.

The Trahaearn are hard workers, specialising in mining and metalwork. Lady Trahaearn is in fact the oldest elf alive as a result of her specially forged exoskeleton prolonging her lifespan. The Trahaearn are known to make use of automatons for various tasks. Their name translates to "strong as iron" in the common tongue.

The Cywir Clan is one of the original clans. They were the only clan to remain on Tarddiad whilst Seren and the rest of the elves departed the world for Gielinor. Like all elves, the Cywir were dependent on Seren's presence to ensure their existence. Isolation from Seren led the elves of Tarddiad to insanity - imbuing crystal native to Tarddiad with their own being in the attempt to be close to Seren. This left the clan with a unique set of shapeshifting abilities, although also drove them into deeper insanity. According to the Tales of the God Wars some members of the Cywir clan were present on Gielinor during the Fourth Age. The Cywir of Gielinor are led by Helwyr, who is the general for Seren in the Heart of Gielinor.