From the RuneScape Wiki, the wiki for all things RuneScape
Jump to navigation Jump to search
The Old School RuneScape Wiki also has an article on: osrsw:Superior slayer monster 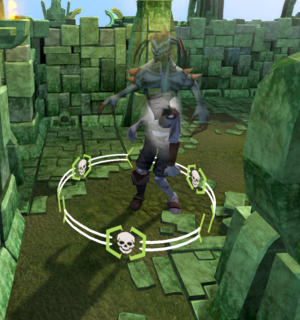 Elite monsters are more powerful versions of normal monsters that have a chance to spawn upon the death of one of its lower-levelled variants.

Many elite monsters tend to have triple the maximum hit of their normal counterparts. In addition, some have a special effect or attack that they can use in combat. Most elite monster kills reward players with 220% extra Slayer experience, if on task, compared to what would be earned from the normal monster. Most elite monsters also give three rolls on the monster's drop table.

The chances of elite monsters spawning can also be improved by up to roughly 4% by using fellstalk incense sticks. Once an elite monster has spawned, it is only attackable by the spawning player (and the spawning player's co-op slayer partner) for three minutes (unless they move a significant distance away). Afterwards, the elite ring circling the monster will change colour slightly and anyone may attack it. If ignored, elite monsters despawn on their own after some time.

If on a Slayer assignment, one elite monster is guaranteed to spawn (unless the task was received before the update on 27 July 2015). Otherwise, elite monsters generally follow a spawn rate of 1/1000[1] whilst off-task, doubling to 1/500 whilst on-task.

Other elite monsters, listed below and referred to as "special elites", are different than the normal lineup of elite monsters. They follow a different spawn rate than others:

Some of these special elites also possess a drop that their normal variants do not possess:

Only the elite soulgazers follow the same triple drop roll as with the normal elites listed above; the other four special elites only have one roll on the main drop table, albeit improved.

The elite versions of monsters have varying names, with a randomly generated prefix and suffix. Super Cow and elite soulgazers are the among a few exceptions; they do not have a prefix or suffix.