From the RuneScape Wiki, the wiki for all things RuneScape
(Redirected from Elite dungeon)
Jump to: navigation, search 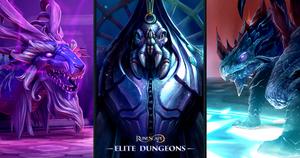 Elite Dungeons are a set of dungeons that function similar to Raids. The first elite dungeon, Temple of Aminishi, was released on 25 June 2018 as part of a set of three dungeons with the same narrative. This was followed by the Dragonkin Laboratory and the Shadow Reef. The overarching story that connects these three dungeons is introduced and explored in the quest Curse of the Black Stone.

Completing the quest Curse of the Black Stone grants players a permanent effect of taking 10% less damage from monsters in the elite dungeons. This effect stacks with the Enfeeble and Weaken curses. It also allows players to unlock an ability that enables both the loot chest and with the chance to double loot. 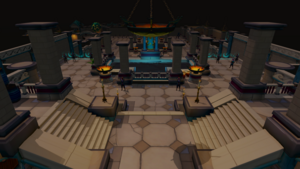 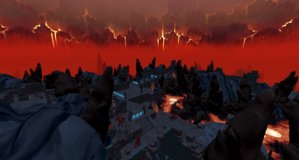 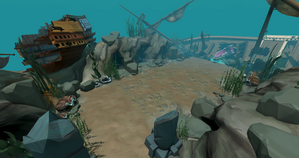 There are 6 achievements in this subcategory (showing 6).

There are 10 achievements in this subcategory (showing 10).