From the RuneScape Wiki, the wiki for all things RuneScape
Jump to: navigation, search
The Old School RuneScape Wiki also has an article on: osrsw:Elfinlocks
Loading...
Draynor bank robberyThe Great Brain RobberyGnomecoptersSalt in the Wound

Elfinlocks is a non-player character and a player spoof. She is among those seen in the Draynor Bank Robbery, in which the Wise Old Man kills her and steals her blue partyhat. In addition to the partyhat, she seems to be wearing spined chaps, an abyssal whip, a cape of legends, and a shirt.

Elfinlocks also appears in a cutscene in The Great Brain Robbery, where her clockwork cat inspires the player to make cats to put into the box. She again wears a blue partyhat, because the Draynor bank replaced the one she lost during the robbery[source needed].

Before the removal of Gnomecopters, she also appeared in the tour of Burgh de Rott, with the same appearance as in the bank robbery.

Finally, she makes another appearance during the quest Salt in the Wound. She is crushed by debris when the player break into the floors of Daemonheim, right after she killed a Soulgazer and received a Hexhunter bow. This proves she is at least level 88 Slayer (assuming she used a Strong survivalist's potion). In Daemonheim, she wears a Promethium platebody, Promethium platelegs, Promethium boots, and Promethium gauntlets, and uses a Promethium spear. 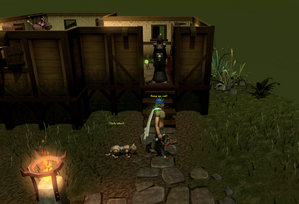 Elfinlocks in The Great Brain Robbery 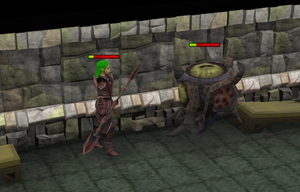 The update history project is a work-in-progress – not all updates to this topic may be covered below. See here for how to help out!
Retrieved from ‘https://runescape.wiki/w/Elfinlocks?oldid=35306105’
Categories:
Hidden categories: