The Elf squad (heavy) was an item used in Mobilising Armies. When used during a game, it became a squad of elves. They used magic, which means they were weak against Goblin squads (who used ranged attacks) and dominant over Dwarf squads (who used melee attacks). They had level 400 combat, 9,600 life points, and level 60 discipline, but they moved at half of the speed of light elf squads. They wielded basic elemental staves and wore dark blue robes, and they found logs and white berries while exploring. If they died during a game, the item would become an Elf squad (heavy) (defeated). 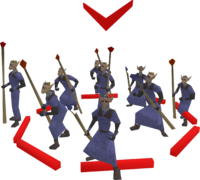 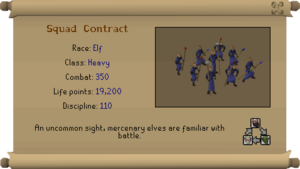 This information has been compiled as part of the update history project. Some updates may not be included - see here for how to help out!
Retrieved from ‘https://runescape.wiki/w/Elf_squad_(heavy)?oldid=35642585’
Categories:
Hidden category: