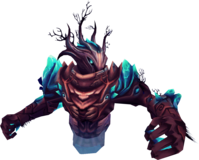 She is widely accepted as goddess of the elves, however, in the Fourth Age a group of elves distinguished themselves from the rest of the elves and began to worship a god known as the 'Dark Lord'. This was brought on by a series of rituals and magics developed by Seren and the Iorwerth to break the elves "curse" in the Third Age: however, the Iorwerth developed an attachment to the 'darker' side of Seren as a result of said rituals: Seren aborted the tests immediately. She later expelled a shard of her being containing said dark thoughts away from the elven lands, this shard was attracted to the death energies that lay around the Death Altar which blocked it's emotion, thus creating the Dark Lord. Before doing so, she warned the clan elders of the dangers which the Dark Lord posed, leading to the creation of the Temple of Light which isolated the Dark Lord within the Underground Pass. Despite this, the Iorwerth's attachment to the Dark Lord resulted in a schism in elven society, leading to the break out of the elven civil war. The remaining elven clans remained loyal to Seren.

Elvish is generally represented in-game by the Welsh language, including Elvish personal names (although there are several important exceptions: the names of Baxtorian, Glarial, and Merethiel and her brothers are not Welsh): for example, Seren is Welsh for "star", and Prifddinas means "capital city".

Some words of the elvish vocabulary, such as Merethiel and Eredthor, are based on the Elvish constructed language Sindarin, created by J.R.R. Tolkien on his Lord of the Rings universe.