The Elemental workshop is an underground complex that you can progressively explore more of as you complete the eponymous quest series. It currently has three floors, although one comprises two levels. The dungeon is most commonly visited to make elemental, mind, body, cosmic, and chaos equipment. The first, that is uppermost, floor is the main level of the workshop with a furnace, bellow, lava trough, water wheel and the elemental anvil styled workbench. The second floor contains machinery used to create primed bars. The third floor contains the mind, body, cosmic and chaos rooms as well as the locked astral and nature rooms.

Pets or familiars can be taken into the workshop.

The workshop was founded in the early Fifth Age, shortly after the discovery of a new type of ore found only in Seers' Village. Years later, a metallurgist named Vitruvius began investigating the metal alongside a freelance mage. Together, through a series of tests, they perfected the art of "priming" the metal, to unlock its true potential. Vitruvius's apprentice, at around this time, accidentally instilled his consciousness into a primed elemental bar, and Vitruvius vowed to return him to some semblance of life.

To do this, Vitruvius started to study the effects of various runic energies on the primed metal. He created various machines, and though failing to return his apprentice to his body, he animated him in a new metal form using cosmic energy. Together, they continued to further study the effects of runic energy on the metal. Their research continued for many years, producing stronger metals and results, until eventually, the mages of the era decided that the research and metals were too dangerous. They shut down the workshop, and sealed off all of the lower floors, leaving only the building on the surface which contained nothing more than some anvils, and attempted to destroy all knowledge of the elemental metal.

Years later, an adventurer found an old book, written in an attempt to preserve the knowledge of the workshop, and began their investigation of the workshop.

Located just to the west of the bank, it is in Seers' Village. It is white-walled with several anvils and an odd-looking wall. The ground floor contains nothing but that at first. However, if the player has a battered key, the odd wall can be unlocked and walked through to enter the workshop. After the Elemental Workshop I quest is completed the key is no longer needed.

The workshop can be first accessed during the Elemental Workshop I quest.

In the central lobbyroom are two anvils, which can only be used to smith elemental bars at first. During or after subsequent Elemental Workshop II-IV quests, other bars may be smithed: mind, body, chaos, and cosmic bars. The ladder to the ground floor and the hatch leading to the second floor are located here.

In the western area elemental rocks may be found, though mining them will transform the rock into an earth elemental. Once it is killed, it will drop an elemental ore that can be picked up. There are also several elementals roaming around the area, although these do not drop elemental ore, but do drop other items. The area also includes a mine with four clay rocks.

The northern area is a room filled with water elementals. This room plays an important part in Elemental Workshop I, where the valves must be adjusted in order to make the water wheel turn.

The eastern room contains air elementals and a giant bellow, which must be fixed in the same quest.

The southern room contains fire elementals and a blast furnace, which must be fired up in Elemental Workshop I. This furnace is the only place where elemental ore and four coal can be smelted into an elemental bar. As the furnace does not have access to the metal bank nor the ore box, and the coal bag does not exist anymore, the only possibility to smelt more than five bars in one trip is to use the beast of burden.

Using an elemental bar on one of the workbenches in the lobby while carrying a hammer (the hammer on the tool belt works fine) to create:

Accessed during and after the Elemental Workshop II quest, four pieces of equipment on this floor (crane, press, tank, and wind tunnel) must be repaired. This level is used to make primed bars. To do so, one must put an elemental bar in the cart. Using the crane, the elemental bar is superheated with lava. The next step is the press, which flattens the bar. Next is the water room, where the bar is put inside, flooded, cooled and then emptied to be taken back to the cart. The final step is to air out and finish off the bar with the air room. After doing so, the new bar can be taken from the cart. These bars are used to eventually develop elemental mind, elemental body, and further types of elemental equipment. There is also a stairwell to the upper level and the lower floors.

Accessed during and after the Elemental Workshop II and III quests, this hallway contains two doors: one with a mind symbol on it, and the other with a body symbol.

Primed elemental bars can be turned into mind bars in this room. Simply place any primed elemental bar into the extractor gun. Then sit in the seat next to it. At the cost of temporarily losing 20 magic levels you have a mind bar.

Mind bars may be used on the first floor anvil to create: 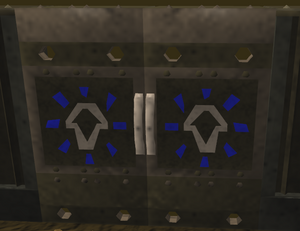 This room can be accessed during and after the Elemental Workshop III quest. To enter, a ragged elemental key is required and the quest begun. After the quest is completed, the key is no longer needed.

Primed elemental bars can be turned into body bars in this room. To do so, place a primed elemental bar into the slot found in the body room on the third floor of the Elemental Workshop, pulling the lever in the room next to it and pushing the big red button. This causes one's Defence level to temporarily fall by 33. For the button to work, the tower needs to be charged, which involves doing the last part of the quest's puzzle again.

A body bar can be used on the first floor anvil to create:

Accessed during Elemental Workshop IV, this hallway requires a keyblade to enter. The key is no longer needed after the quest is completed. It contains five more doors, four bearing runic symbols, and one unmarked. The runed doors are marked with the symbols of Cosmic, Chaos, Astral, and Nature. 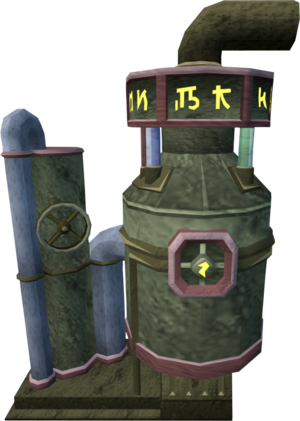 Primed elemental bars can be turned into cosmic bars in this room. To do so, go to the south east area. Place a primed elemental bar on the draining machine in the corner of the room, and drain the energy from the machine. The machine must first be charged, by aligning the cosmic matrix puzzle again, as done in the quest.

A cosmic bar can be used on the first floor anvil to create: 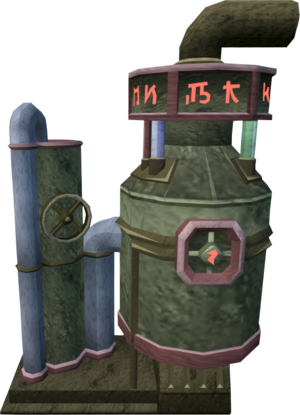 The chaos draining machine, charged and ready to imbue a primed bar

Primed elemental bars can be turned into chaos bars in this room. To do so, place a primed elemental bar on the draining machine near the chaos tablet on the floor, and drain energy from the machine. The machine must first be charged by instructing Da'Vi to charge it with instruction cubes, as done in the quest.

A chaos bar can be used on the first floor anvil to create:

There are currently three locked doors in this hallway: the astral and nature doors, and an unmarked door presumably leading further into the workshop.

There are no intelligible species in the Elemental Workshop, other than perhaps the Earth Elementals which appear when an elemental rock is mined. Their text is always "Grr... Ge'roff us!".

Da-Vi is also capable of obeying commands, and speech, though it contains no soul. 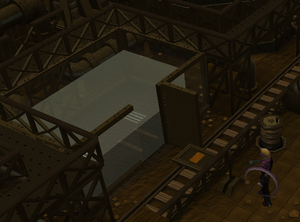