The elemental talisman is an item that allows players to enter all four of the elemental runecrafting altars (Air, Water, Fire, and Earth). Unlike all other talismans, it cannot be bound into a tiara or a runecrafting staff.

Although it would seem versatile, this talisman is rarely actually used instead of the standard 4 elemental talismans, most likely because they can be made into their related tiaras while this talisman cannot. It has been superseded in most cases by the Wicked hood, Omni-talisman and Omni-tiara.

It cannot be used as the talisman ingredient required for crafting combination runes.

Since it is connected to all four of the elemental altars, generally the locate function is completely dysfunctional. When a player attempts to locate an altar with it they will get the message "You cannot tell which direction the Talisman is pulling...". However, if the player is already close to one of the four elemental altars (that is, closer to one altar than the other three) the elemental talisman will begin to function normally, and guide the player to that altar with the usual "The talisman pulls to the North-East" type messages.

The addition of the wicked hood has added another use for this item. Using this talisman on a wicked hood allows the player to use the hood's rune-creating ability an extra time per day. As this is a one-time investment which leads to a small sum of easy money every day, this caused the price of Elemental talismans to spike greatly.

Elemental talismans can be obtained as drops from the monsters of The Abyss. Although it is not common, it is fairly easy to obtain from the abyssal leech, which has extremely low life points. The easiest way to obtain this drop is to use the fairy ring network (alr) to go to the Abyssal Area. Note that after a while in the abyss, the monsters become tolerant of you.

You may also purchase one on the Grand Exchange, which may be an alternative method instead of killing Abyssal creatures yourself. 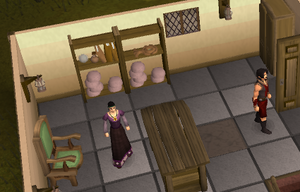 The talisman is on the shelf.
Retrieved from ‘https://runescape.wiki/w/Elemental_talisman?oldid=35638984’
Categories:
Hidden categories: