Among the ancient scrolls and papers held at the Dig Site's Examination Centre, scholars have discovered more references to the mysterious elemental ore. Recently they have uncovered a beaten book detailing long-lost uses for this odd material.

Can you decrypt the code that will lead you to the deeper depths of the Elemental Workshop? Can you get your head around fixing the mind-bending machinery, or will you fry your brain in the attempt?

The location of bookshelf

To begin, go to the Exam Centre, south of the Varrock Dig Site and east of Varrock. Search the bookshelf for a book found towards the south end of the eastern wall of the building. Pick up the beaten book with a scroll in it as a bookmark. Make sure to keep the book, as it is needed later. Read the scroll, then head to Seers' Village.

In Seers' Village, go to the building west of the bank. With your Battered key, Click on the odd-looking wall on the north wall to walk through it. If you are missing the Battered key, you can find one by going into the building just south and searching the bookcases. Once inside, follow the directions on the scroll;

Now head back into the middle room and open the hatch.

Map of the room

Once downstairs, players need to fix the machinery. First off, take both schematics, crane and lever schematics, from the schematics crate south of the stairs, near the lava pit. Players have to take both of them. Read the crane schematic. Go back upstairs and use one of the elemental bars on the workbench. Smith an elemental crane claw.

Go back down the hatch and lower the claw using the lever that is one square to the east of the schematic crate. Make the repairs by using the claw in the inventory with the claw on the crane. Once it's repaired, raise it again using the same lever. (Note: If you use the lever and a message says the system is not pressurized; go to the first workshop (on the top level) and activate both the waterwheel in the northern room and the bellows in the eastern room by the valves or lever next to each. Then go back downstairs.) 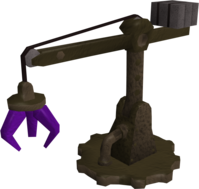 To the immediate north (2 steps), there is a small area with a lever and a picture of a mine cart. Pull the lever, and the jig cart and bar should move on to the next step, the press.

If you use the third lever before the bar is dropped, you will have to pull the lever multiple times until it is back under the crane.

Use the short staircase on the south-west or north-east corners to get to the upper gantry area.

Move to the western side of the room over the press to get to the junction box.

Location of the pipe junction box.

Open the junction box to work on the pipes for the press. To connect the pipe junctions, simply click on one pipe section and then click the section to which you want to connect it. Players should arrange them as seen in the image.

The pipes in the junction box.

For the next two parts, search the crates to find a small cog, medium cog, large cog, and a pipe. The location of these items is random for every player. There are also crates on the walkway above. Go up the northeast stairs, and 'use' the pipe item on the piping with a hole in it, north of the water tank. The piping must be repaired before proceeding. 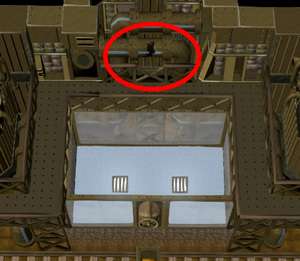 The piping to 'use' the pipe item on.

Your bar will turn blue/white when it's ready, but it may seem orange again for the next step.

Pull the jig cart control lever in the middle room in front of the mine cart sign and the jig moves along to the next area. 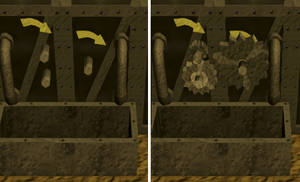 Position of the cogs

Turn on the fan with the old lever to the south of the machine, then turn it back off again. If the message says the fan is sucking but it should be blowing, then the cogs are not on the correct pins. Turn the fan off and position the cogs correctly. If the machine says "It must be powered somewhere else", head upstairs and make sure the water wheel to the north is rotating. If the water wheel is not rotating, pull the lever near the wheel.

A bit of mind draining

Use the stairwell under the hatch in the north-west of the main room to go down another level, where there are two sets of doors: one with the mind symbol and another with the body symbol. The body door cannot be opened yet, so go into the mind room. Place the primed bar on the extractor gun (a small table next to the extractor hat) then operate the extractor hat. You will temporarily lose 20 magic levels, as your skill level is drained to turn the bar into an elemental mind bar. Pick up the bar from the extractor gun.

Any number of elemental mind bars can be made as long as the magic level does not fall below 20. There is no danger of dying or losing life points, unless no bar is placed under the extractor gun, in which case your character receives a shock, depleting 10% of your LP. If your magic level is less than 20, you cannot even sit in the chair. Players can use a stat restore potion here.

Now, simply go back up to the workshop on the top floor, and, with the beaten book in inventory, use the mind bar on the workbench to make a mind helmet out of the elemental mind bar (you will need to select the drop down at the top of the smithing interface and select Mind Equipment). You no longer need the beaten book to make mind equipment. To make a mind shield repeat this process on another elemental bar. 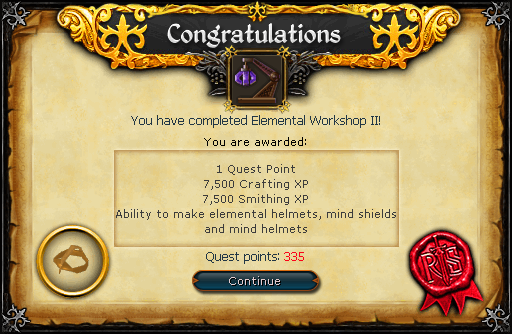 Elemental Workshop II is directly required for the following quests/miniquests: