The Elemental Workshop I is a quest in which the player finds a mysterious book in Seers' Village, guiding them along the discovery of a lost magical mineral – the elemental ore.

Hundreds of years ago, a mineral was found that had the ability to change the property of Magic.

The magicians, fearing the effect this may have on their profession, sealed this Workshop forever; or so they had hoped. See if you can rediscover the lost knowledge of elemental ore.

Head to Seers' Village and enter the house south-west of the bank, marked with the quest start icon. Search the bookcase on the east wall to receive a book titled The Elemental Shield.

The book talks about an ore that was found in the Fifth Age, which is able to absorb, transform and focus elemental energy. Due to the discovery, a workshop was created in Seers' Village, calling all craftsmen to invent new devices using this unique ore. After some time, the true potential of the ore was revealed and the workshop had to be closed down, along with the destruction of any and all details of the manufacturing processes.

After opening the book and starting the quest, right-click and cut open the book to get a battered key, turning the tome into a slashed book. Head directly across the road to the building marked on the map by an anvil icon, and use the key on the northern "odd-looking" wall on which tools are hung, with a barely visible outline that hints at a secret passage behind the wall. Climb down the stairs there to enter a workshop.

Find a piece of leather in one of the crates in the north-west corner of the central chamber. Next, head into the eastern chamber. Fix the bellows with a spool of thread you brought along and the piece of leather you just found, then pull the lever next to it. The bellows should now start pumping air.

Head back to the central chamber. Search the small boxes in the north-east corner to obtain a stone bowl. Now go to the southern chamber and use the bowl on the lava trough to fill it with lava, then use it again on the furnace to the east to empty the lava into it, lighting the contents on fire.

Finally, head through the western passage to the hall on the north and attempt to mine an elemental rock. The rock springs to life as an earth elemental, yells and starts to attack. Kill it in order to loot a piece of elemental ore from it. Familiar cannot be used when fighting the elemental, or it will disappear. Be aware that signs of the porter should be removed – as these will transport the ore to the bank. It is possible to kill another elemental to receive further ore drops if any ore is banked.

Return to the southern chamber and use the elemental ore, along with the four pieces of coal you brought along, on the furnace to smelt an elemental bar. Players who receive the message The furnace needs to be hotter in order to be of any use need to return to the north and east rooms to ensure that the water wheel is spinning and the bellow is blowing air.

With the slashed book in the inventory, go back to the centre and use the elemental bar on the workbench to make an elemental shield. Players who are unable to craft the shield need to destroy the slashed book and obtain a new one from the bookcase. 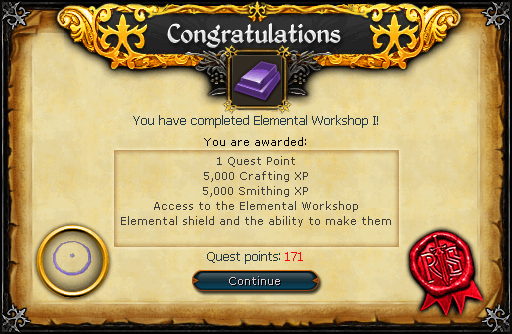 Elemental Workshop I is directly required for the following quests/miniquests: