The Eldritch crossbow is a two-handed crossbow that requires level 92 Ranged to wield. It may be obtained as three separate rare drops from the third elite dungeon, The Shadow Reef.[1] It has to be assembled out of its three pieces, the stock, the limbs, and the mechanism, all of which are dropped by The Ambassador. [2] This process requires level 96 Fletching.

The crossbow degrades to a broken state over 60,000 charges of combat. It can be repaired by a repair NPC for 4,800,000 coins, or for cheaper on an armour stand.

It can be augmented with an augmentor to make the augmented Eldritch crossbow, or dyed with barrows, shadow, third-age, blood, or ice dye, in either order. 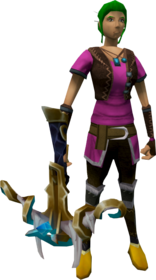 The Eldritch Crossbow has a special attack, Split Soul, requiring 25% adrenaline to activate. For 15 seconds, instead of healing the player, the Soul Split curse damages the player's target for 4 times the amount of life points it would have healed.[3] This means that, given the diminishing returns from how Soul Split heals players, abilities that deal damage in multiple smaller hits, such as Rapid Fire and Corruption Shot, benefit more than abilities that have a single large hit, such as Snipe. The weapon must be wielded to maintain its effect, or it will end early. There is no cooldown to this attack, so the effects can be renewed again even if the player is still benefiting from the crossbow's special attack.

The boost from the amulet of souls also increases the damage output. Damage dealt by the special attack is displayed as separate hits using blight hitsplats. As Soul Split heals for full damage against targets that would cause incoming damage to be reduced or blocked, Split Soul's blight effect bypasses these effects - such as Taraket the Necromancer's phase transition or the Black stone dragon's flying rampage.

Due to the importance of keeping Soul Split active for the duration of the special, it is best to use it against monsters or bosses that cannot or will rarely hit the player, to minimise the amount of prayer flicking required, as even a second of prayer flicking can cause several blight hits to miss.

The base repair cost of the Eldritch crossbow when completely degraded to 0.0% item charge is 4,800,000 coins. It can be repaired by: